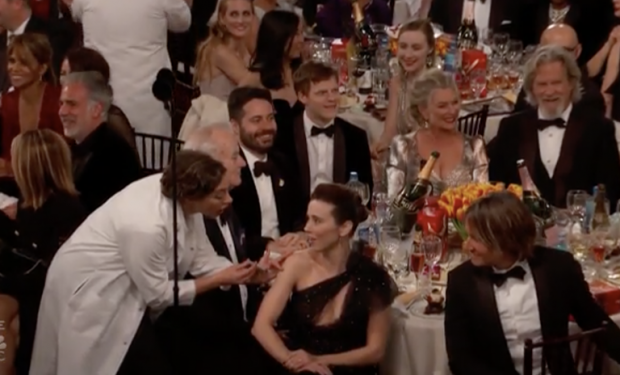 Last night's Golden Globe featured a very uncomfortable segment when co-hosts Sandra Oh and Andy Samberg announced, "Roll up your sleeves Hollywood, 'cause you're all getting FLU SHOTS". This was immediately followed by a chorus line of young men and women in lab coats roaming the crowd with what seemed to be syringes.

"Jump the Shark" is a phrase that references the desperate attempts by Hollywood to remain relevant. The phrase's genesis comes from an episode of "Happy Days" (a very popular sitcom from the 1970's about the idyllic 1950's).

The popular character Fonzie (the super cool character with greased back hair, leather jacket and two thumbs up regularly say'n, "Aaaaaaaaay") was tasked with boosting sagging ratings by jumping a shark on water skis.

Also as a kid, I knew it was over for the popular TV show "Lost in Space" when Vegetable People were featured characters in a season 5 episode (yep, people in veggie costumes). Was I suppose to 'want' to eat my veggies now?

We've been covering Vaccines and Vaccinations here on FreedomsPhoenix daily for a decade and know lots of 'Sharks are going to get Jumped' in the coming months as the legislative session begins in each State and the U.S. Congress.

Want to understand why?

The Vaccine Cover-up and the Massive Corruption at the Top: This is a Pharmaceutical Driven Agenda

The False Prop Of "Get Your Flu Shot": "Influenza-Like Illness"

Millennials are the least likely generation to get a flu shot because they are 'too busy' ..

Vaccine McCarthyism is rooted in pseudoscience and false conclusions

The Measles Vaccine Narrative Is Collapsing

NEWSFLASH: Measles is no big deal

2020: Both Sides All In, As Vaccine Legislation Revs Up