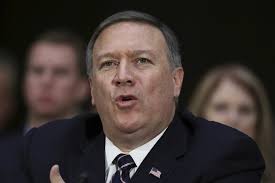 All of the above tactics were used against the Islamic Republic for nearly 40 years, orchestrating the 1980s Iran/Iraq war included, wanting both countries to destroy each other - US launched aggression against Tehran not so far implemented.

The Trump regime is so hellbent for replacing sovereign Iranian governance with pro-Western puppet rule that if war by other means fails like every time before, naked aggression may be the next option against a nation able to hit back hard.

"This test violates UNSCR 2231. Iran's missile testing & missile proliferation is growing. We condemn this act and call upon Iran to cease these activities."

Iran's ballistic missile program is entirely legitimate. It's solely for defense, designed to carry conventional warheads alone, not nuclear ones as US and Israeli Iranophobes falsely claim.

On May 8, the Trump regime illegally pulled out of the international treaty, overwhelming endorsed by the world community.

Multiple rounds of sanctions his regime imposed on Iran are flagrantly illegal. Neither SC 2231 or any other SC resolutions prohibit Tehran's legitimate ballistic missile development, testing and production.

"(T)he most interesting and, of course, ridiculous, part of your claim is that you refer to a resolution, from which your country unilaterally and illegally withdrew," adding:

"You have not only violated it, but also encouraged others to violate it, and threatened those who committed to their obligations to punishment and sanctions."

Iran is the region's leading peace and stability advocate. Its legitimate nuclear program has no military component. The IAEA repeatedly said Tehran fully complies with its JCPOA obligations.

The Islamic Republic supports regional and global denuclearization, wanting these WMDs eliminated before they eliminate us.

Its military readiness and weapons development is solely for defense, not offense - polar opposite how US-dominated NATO, Israel, Turkey, the Saudis, and their imperial partners operate, waging endless wars of aggressions against nations threatening no one.

Virtually all US/Israeli/AIPAC/major media accusations against Iran are bald-faced lies, not a shred of evidence supporting them.

The Islamic Republic and other sovereign independent countries are falsely accused of crimes committed by the US, NATO and/or Israel against them - time and again, the world community, including the UN, failing to demand these countries be held responsible for high crimes too egregious to ignore.

"The US has long seen Iran's ballistic missile program as a threat to its ally Israel" - another bald-faced lie. The Journal failed to explain that the US and Israel are mortal threats to the Islamic Republic - not the other way around.

Claiming the Trump regime withdrew from the JCPOA "in part because the pact didn't put major curbs on Iran's ballistic missile program" is more deception."

Trump regime hardliners and DLT himself want regime change in Iran by whatever it take to topple its sovereign independent government - no matter how destructive and illegal.

That's what pulling out of the JCPOA, imposing illegal sanctions, employing destabilizing tactics, and waging propaganda war are all about.

That's what the Journal and other major media don't explain - blaming all sovereign independent countries targeted by the US, NATO, and Israel for crimes committed against them.