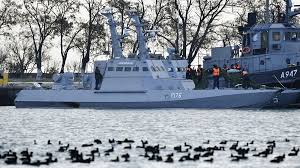 Much more will likely come out about what happened in Kerch Strait Russian waters and why once the Kremlin investigates the incident thoroughly.

There was nothing accidental or happenstance about Kiev's Sunday Black Sea provocation.

It was well-planned in advance, like all provocative incidents, perhaps this one jointly orchestrated by Trump and Theresa May regime hardliners, part of an endless campaign to vilify Russia unjustifiably - falsely blaming the country for crimes committed by its accusers.

Kiev wouldn't have attempted the stunt without at least US involvement and/or approval - timed ahead of the country's March 2019 presidential election.

Kremlin spokesman Dmitry Peskov issued a statement, saying "(t)he imposition of martial law in some regions may pose a risk of escalating tensions in the conflict-hit region, namely the southeast" along the border with Donbass and Russia.

According to Security Service of Ukraine (SBU) head Vasily Gritsak, regime counterintelligence officers were aboard the vessels involved in Sunday's provocation - providing "counterintelligence support to the Ukrainian Navy unit" in Russian waters, an SBU statement said.

All of the above constitute a virtual arsenal - perhaps with intent to use it belligerently against Russia or Donbass freedom fighters.

An FSB statement said "(d)espite the measures taken by the Russian side, the Ukrainian navy ships were put on combat alert, with covers removed from the artillery systems and barrels being raised to an angle of 45 degrees and pointed at the Russian ships and boats."

The hostile action violated Article 19 of the Law of the Sea and Article 11 of Russian maritime law.

"The Russia side warned the Ukrainian ships that a threat of the use of weapons in the Russian territorial waters will be considered as violation of norms of international law and Russia's legislation," the FSB added.

Commanders and crew of the vessels acted on orders by Kiev to willfully breach Law of the Sea provisions - a hostile anti-Russia action to escalate regional tensions.

On Tuesday, Tass and Sputnik News reported that 12 of 24 Ukrainian seamen and officers were charged with lawlessly breaching Russia's border, including gunboat commander Roman Mokryuk.

A Simferopol court ordered them held for two months through January 29. They can be tried and sentenced to up to six years imprisonment for their offense, according to Russian news agencies.

UN secretary general Antonio Guterres issued his customary unacceptable statement, calling on "both parties to exercise maximum restraint and to take steps without delay to contain this incident and reduce tensions" - ignoring Kiev's willful provocation, its UN Law of the Sea and Russian maritime law breach.

The US-installed Kiev regime aggressively and provocatively committed the hostile act. The world community and Guterres should demand it be held accountable for violating international and Russian law.