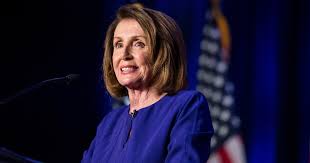 House Minority Leader Pelosi aims to become House speaker again in January when the new Congress convenes, the post she held from 2007 - 2011. On Wednesday, undemocratic Dems vote on who gets their highest congressional position from January 2019 - January 2021.

A House member since 1993, she's as hardline as GOP neocon extremists, supporting most everything just societies abhor.

She's pro-war, pro-business, pro-Wall Street, anti-populist. She supports raising income taxes on the lowest-earning 80% of taxpayers by a three-fifths majority vote - instead of backing tax relief legislation for low and middle-income households, funded by tax hikes on the rich, rescinding the Trump supported GOP giveaway last December she benefitted hugely from.

She cut a deal with potential House speaker challenger Marcia Fudge not to run for the top post. On Tuesday, Fudge turned truth on its head, saying "the most loyal (Dem party) voting bloc, black women, will have a seat at the decision-making table" with Pelosi as speaker.

What never was before will be no different in the new Congress - exclusively serving wealth and power interests at the expense of the vast majority of Americans congressional leaders don't care a hoot about.

Pelosi will likely become House speaker in January, but it's not a sure thing, the Wall Street Journal saying:

Over a dozen House Dems seek "a younger, new voice as leader." Progressive Dem in name only, Rep-elect Alexandria Ocasio-Cortez supports her, including all the unacceptable baggage she represents, disgracefully calling her the "most progressive candidate" for the top House post.

Unless things change in the coming weeks, Pelosi will run unopposed when Congress convenes in January, things rigged for her, the way both right wings of US duopoly rule operate.

Obama endorsed her, saying she's "one of the most effective legislative leaders that this country's ever seen."

Her extremist agenda is hostile to ordinary Americans she and the vast majority of congressional members consistently betray legislatively.

According to the Center for Responsive Politics, Pelosi is the sixth wealthiest House member, her net worth estimated at over $100 million in 2015 - likely millions more now from many investments, including equities and commercial real estate.

She and her wealthy husband profited handsomely from privileged information about IPOs, including companies seeking business-friendly congressional legislation.

Her voting record speaks for itself, backing:

the 1999 Gramm-Leach-Blily Act repeal of Glass-Steagall, permitting some of the most egregious financial abuses in the modern era;

the September 2001 Authorization for Use of Military Force (AUMF), permitting endless wars of aggression in multiple theaters raging endlessly;

annual National Defense Authorization Acts and US wars of aggression;

tax cuts for the rich, benefitting her and her husband enormously, without admitting it;

Pelosi and most other congressional members are beholden to powerful monied interests funding their campaigns, supporting them legislatively.

When it comes to Israel, she "stands with (the Jewish state) now and forever," earlier turning truth on it head, saying the Israel/Palestinian conflict "is not over occupation, and never has been. It is over the fundamental right of Israel to exist."

Her congressional record shows she's anti-peace, equity and justice for everyone everywhere. She's for whatever enriches America's privilege class more than already.

Calling "free market (capitalism) our greatest asset" ignores how profoundly unfair the American way is for the vast majority of its people - benefitting the privileged few alone at the expense of most others.

Pelosi represents what plutocratic governance is all about, the great divide between super-wealth and growing millions of impoverished Americans, a nation perpetually at war for unchallenged dominance - an agenda she and the vast majority of congressional members support.