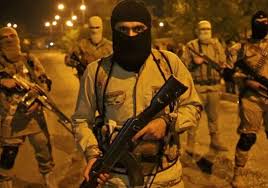 Even ideological extremists need monetary and other incentives to carry out CW and other atrocities.

According to ISIS documents obtained by RT Arabic, their fighters were paid for their services - in silver for CW attacks wrongfully blamed on Damascus, gold for downing a helicopter, cars for taking down an aircraft, incentives to try harder - payments for "fight(ing) the enemies."

Even ideologically driven jihadists need motivation. Financial ones work best, the same way they do for individuals involved in legitimate work.

According to Iraqi Lt. Col. Jaber Asaad, evidence "confirms that the group possessed chemical weapons that are banned throughout the world."

They include sarin, chlorine, and other toxins, supplied by foreign countries, transported to Iraq, Syria and elsewhere, used as US-supported weapons of war.

"A huge number of (ISIS and other jihadists) arrived in Iraq (and Syria) from other countries. You can talk about hundreds of thousands of people, including the families of terrorists – wives and children who were smuggled illegally into" these countries, largely from Turkey and Jordan, perhaps from Israeli occupied Golan as well," Asaad explained.

The US wages all its wars of aggression without mercy. Unofficial rules of engagement permit anything goes - fundamental rule of law principles flagrantly violated.

Throughout the history of US wars, notably during and since WW II, the Pentagon used and continues using banned chemical, biological, radiological incendiary and cluster munitions.

Radioactive, chemically toxic and poisonous depleted uranium, white phosphorous able to burn flesh to the bone on contact, and other illegal weapons are also used.

In all its war theaters, Washington flagrantly breaches international, constitutional and US statute laws pertaining to warfare.

Coverup and denial is official US policy. A Pentagon statement lied, saying "(a)s a matter of policy, the coalition will not publicly discuss the use of specific weapons and munitions in operations."

"However, every weapons system in the US inventory undergoes a legal review to ensure the weapon complies with the Law of Armed Conflict."

State-sponsored deception is also longstanding US policy. Since WW II, notably post-9/11, US crimes of war and against humanity far continue to exceed serious wrongdoing by other nations.

Under Republicans and undemocratic Dems, America is an outlaw state. Its endless wars of aggression threaten everyone everywhere.

It opposes the rules-based international order - threatening mass destruction by asserting the preemptive right to use nuclear weapons, even against non-nuclear states.

Its "peace" agenda features endless wars of aggression. Its rage for dominance may kill us all.

Cardiologist Richard M. Fleming and Others on the Mother of All Public Health Scams

Permanent US Occupation of Afghanistan Planned