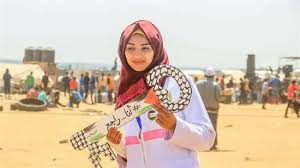 Clearly identified as a first-responder medic in the field by her white attire, she was treating wounded Gazans well inside Israel's repressive border fence when lethally shot - a willful act of cold-blooded murder.

After first saying her killing was accidental, a bald-faced lie, Israel further turned truth on its head, disgracefully claiming she was a Hamas human shield.

She was a volunteer media, an angel of mercy, in harm's way aiding the wounded, her life lost helping others.

On July 17, B'Tselem commented on the tragedy and outrage of a Palestinian life taken by Israeli viciousness, quoting Najar's mother, saying:

"When people were called on to come to the Return Marches on the Gaza Strip border, Rozan was among the first to go help because she believed in humanitarian work."

"She was motivated by believing the march to be safe and that she would be safe as a member of a medical crew."

"I saw her when she volunteered at the protests. She flitted around like a butterfly, running back and forth to care for the injured."

"When (she) was in the field, I was proud and calm, because she was a paramedic, and I believed the Israeli military wouldn't harm her."

"I sat down in the ambulance that was parked nearby. It was about 4:30 PM, shortly after the late afternoon prayers."

"My colleague Rozan a-Najar came and we talked a little. She was in a good mood because she'd bought a new cell phone."

"She asked me to hold on to it for her because she was going to go help demonstrators and was afraid she'd drop it."

"Because I was going to go along with her, I gave the phone to another colleague of ours. Rozan took the first aid kit."

"Then, she and I and the other paramedics went to treat the injured who were starting to come in as the clashes between the protesters and the soldiers escalated."

"There were about 70 protesters who were suffering from teargas inhalation. On the other side of the fence, there were a few jeeps."

"Next, I went with a few other paramedics, including Rozan a-Najar, Rasha Qdeih, Rida a-Najar and Mahmoud 'Abd al-'Ati, toward the protestors."

"We stood close to the protesters and heard people crying out that two guys had fainted near some concertina wire that had been laid on the ground about 10 meters away from the fence with Israel."

"We decided to go over there to give them treatment. Rozan and I walked first. We raised our hands up above our heads to set the soldiers at ease, to make them see we're paramedics."

"We were all wearing medical vests with first-aid crew symbols on them. We got to the two young men, and when we started evacuating them, the soldiers started firing a heavy barrage of teargas canisters at us."

"I think they were firing from one of the military jeeps. Rozan and Rasha started choking. I asked Mahmoud to care for Rozan and I took care of Rasha."

"Then, the four of us moved away from the fence. The young men and other paramedics who stayed behind managed to get out the two guys who'd been hurt by the gas."

"There were no protesters near us. At around a quarter to six, we saw two soldiers get out of a military jeep, kneel and aim their guns at us, taking up a sniper stance."

"Rozan was standing to my right and Rasha was behind me. We were talking. Suddenly, they fired two live bullets at us. I looked at Rozan and saw her point to her back and then fall down."

"A second later, I fell too, because I had been hit above the left knee. I was later told that Rozan had been hit in the left side of the chest."

"Mahmoud was hit by shrapnel in the right hand and the pelvic area."

He and other paramedics, including Rozan and Rasha attempted to treat two injured Gazans when Israeli soldiers fired teargas canisters at them. He and others gave them first aid.

"At around 5:45 PM (on June 1), two soldiers got out of a military jeep and pointed their guns at us. They fired two bullets at us."

"One hit Rozan in the left side of the chest and exited out her back. At the very same time, I was hit by shrapnel from live rounds."

Rozan fell unconscious to the ground. Taken to a medical tent, she was then transported to a Khan Yunis area European hospital.

After about 30 minutes of resuscitation attempts, she was pronounced dead. When told that Rozan was shot by Israeli soldiers, her mother Sabrin said she and her husband Ashraf rushed to the hospital to be with her, saying:

"Her clothes were covered in blood. I started crying and screaming. My spirit broke. I knew I'd never see her again. That I'd lost my daughter and I'll never get her back. I'll never be able to hug her ever again."

"Losing her is terrible. What wrong did Rozan commit that she had to be killed?"

Since March 30, Israeli soldiers murdered about 140 Gazans threatening no one in cold blood, including women, children, journalists and paramedics - injuring over 16,000 others, according to Gaza's health ministry.