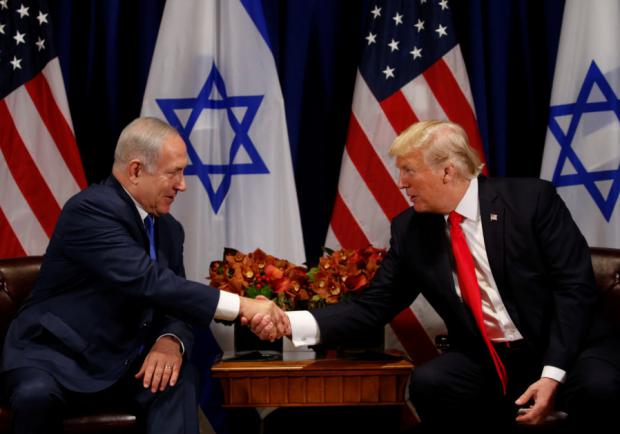 Trump and Netanyahu in New York

On Monday, both leaders met on the sidelines of the UN General Assembly's 72nd session, Iran the key topic of discussion as expected.

A White House readout of their meeting "underscored the unwavering commitment of the United States to Israel's security" - two rogue states partnering in each other's high crimes, it failed to explain.

Both leaders discussed their mutual cooperation in "counte(ing) Iran's (nonexistent) malign influence," along with plotting endless war on Syria, falsely claiming they support resolving the conflict Obama launched, Trump continuing it, naked US aggression against a sovereign independent state.

They pretended to want "an enduring Israeli-Palestinian peace agreement…" The only one they'll accept is continued occupation harshness, Palestinians subservient to US/Israeli dominance over their lives and welfare.

Netanyahu offered a scheme on how to undermine the Iran nuclear deal, falsely claiming it's a way to fix it. He and Trump want the Joint Comprehensive Plan of Action (JCPOA) subverted or killed.

Netanyahu declined to offer details of his scheme, telling Trump "I look forward to discussing with you how we can address together what you rightly call a terrible nuclear deal with Iran, and how to roll back Iran's (nonexistent) aggression in the region, especially in Syria."

On Monday at the UN, Iranian President Hassan Rouhani said "(t)oday you can see that the US is trampling on its agreements with Cuba and other countries, one after the other."

"On the nuclear agreement, the Americans are looking for excuses, and the world can see what Iran has repeatedly announced is true that the US is not reliable."

"The US is drawing up new plans and plots against developing countries on a daily basis, but it has always faced defeat."

It supports the scourge of terrorism it claims to oppose. Rescinding the nuclear deal will "chip away at international trust placed in the United States of America."

"Withdrawing from the JCPOA, would mean trampling on a clear political obligation that a government has. This is nothing to be proud of," Rouhani stressed.

On Monday, Trump and Netanyahu discussed ways to "trample" on an international treaty, accepted by the world community.

Trump challenged the IAEA to go beyond its mandate - to inspect military sites Iran won't permit for obvious reasons, nor would America, Israel and most other countries, Trump blustering:

"We will not accept a weakly enforced or inadequately monitored deal," a statement directed at IAEA head Yukiya Amano.

Both Trump and Netanyahu will address General Assembly members on Tuesday. Their remarks will be closely monitored.