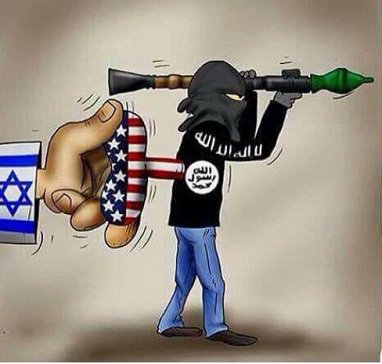 Discount ISIS claiming responsibility. Germany along with America, other NATO nations and Middle East partners support the terrorist group. Why would it bite the hand feeding it? Makes no sense!

They're identifiable the way fingerprints ID people. They're strategically timed for an intended purpose. They're designed to capture world headlines, conceal responsibility of the perpetrator, and point fingers at a convenient patsy or patsies.

On Wednesday, reports indicated Berlin police found identity documents (apparently a passport) belonging to a Tunisian national named Anis A. in the cabin of the truck used to kill and injure dozens on Monday.

Following an earlier false flag attack, a cartoon on independent media showed an individual dressed in black, a suicide jacket strapped to his chest, his finger on the triggering mechanism, commenting "s..t, I forgot my passport" - mocking the absurdity of a criminal leaving identifying documents at the scene of the crime, making capture all the easier.

The 9/11 mother of all false flags provided a treasure trove of information, showing what happened was other than the official narrative. Most obvious was how could a handful of terrorists outwit America's 16 intelligence agencies, including sophisticated NSA eavesdropping on anyone or anything suspicious back then?

False flags are a Western tradition, notably in America. Was the Monday Berlin attack and same day assassination of Russia's ambassador to Turkey the latest examples?

Were CIA dirty hands involved in either or both incidents? Were they linked to Aleppo's liberation, Russia, Iran and Turkey trilaterally cooperating on cessation of hostilities and conflict resolution in Syria excluding US involvement, along with jihadist fear-mongering to pressure Trump to keep waging imperial wars and perhaps other reasons for what happened?

When it comes to geopolitics, things are seldom as they seem. Truth is other than what's widely reported.