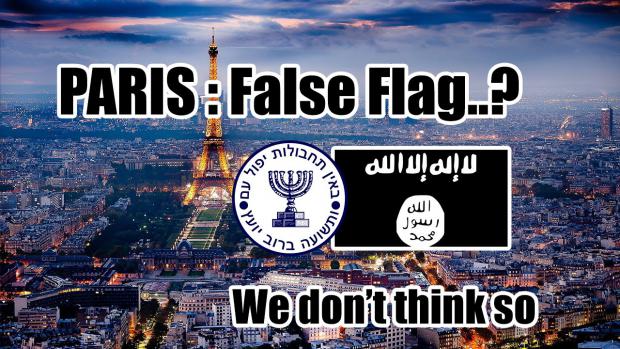 Blowback or False Flag in Paris?

It's too soon to know for sure. Given French complicity with ongoing US state terror throughout the Middle East, North Africa and elsewhere, odds strongly favor the latter.

Multiple likely well-planned Friday night attacks in Paris had a disturbing aroma to them - including France's knee-jerk police state reaction. More on this below. Here's what happened.

At least seven apparently well-coordinated attacks occurred, gunmen with automatic weapons and suicide belts killing over 150 victims. Many others were injured. Stade de France stadium was struck during a football (soccer) match between France and Germany.

So was the Bataclan theater during a concert, restaurants full of patrons, a cinema, and pedestrians on Bichat Street, the Avenue de la Republique and Boulevard Beaumarchais.

"Two decisions will be taken," Hollande announced. "The state of emergency will be decreed, which means several places will be closed off, and traffic will be limited in certain areas."

"The state of emergency will apply across the country. The second decision I have taken is to close the borders, so that the people who have committed these crimes can be apprehended."

"We know where this attack came from. We must show compassion and solidarity, but we must also show we are united. There is much to fear, but we must face these fears as a nation that knows how to muster its forces and will confront the terrorists."

Hollande cancelled his G-20 summit participation, scheduled for November 15 and 16 in Turkey. It's unclear if Obama will attend. The world's leading perpetrator of state terrorism offered France "full support," duplicitously saying America shares the bonds of "liberte, egalite and fraternite."

US post-9/11 knee-jerk reaction blamed bin Laden and Al Qaeda for the attack - the mother of all Big Lies, we now know.

ISIS was automatically blamed for the Paris attacks - despite no evidence so far establishing responsibility. Official statements, actions and media hype created an atmosphere of fear, a likely public willingness to sacrifice freedom for so-called security, a rationale for harsh measures to try stemming the human refugee flood caused by US-led imperial wars, and a desire for revenge.

Perhaps the stage is set for escalated Western wars OF terror instead of unity to battle the scourge of ISIS and likeminded groups. Were Friday attacks state-sponsored terrorism - a carefully staged false flag for whatever may follow?

Herman Goering once explained how easy it is to get people to go along with "the bidding of the leaders…All you have to do is tell them they are being attacked, and denounce the pacifists for lack of patriotism and exposing the country to danger. It works the same in any country," he said.

Friday Paris attacks were either blowback for Western wars on Islam or a state-sponsored false flag. Odds strongly favor the latter. Sordid Western history of false flags for subsequent planned events suggests it.

On September 20, 2001, George Bush lied to Congress and the public, claiming America was attacked because we are "a beacon of freedom." The attackers were "evil. This is civilization's fight." He suppressed Washington's direct responsibility for what happened, perhaps complicit with Israel's Mossad.

The aftermath of 9/11 is clear - endless US-led imperial wars, a phony Global War on Terrorism (GWOT), an assault on fundamental human and civil rights, police state harshness replacing them, an America unfit to live in.

Will France and other European countries become more belligerent and repressive than already in response to Friday's incident?

Were Washington and perhaps Israel's dirty hands involved in what happened? Daesh (ISIS/ISIL/IS) is such an easy target to blame. It's simple getting most people to believe it unquestionably.

The Big Lie repeated often enough works the same way every time. ISIS is the new "Enemy Number One." Its creation by Washington and use as proxy foot soldiers is suppressed.

Was Friday's Paris incident prelude to something similar planned for New York, Washington, and/or other US cities?