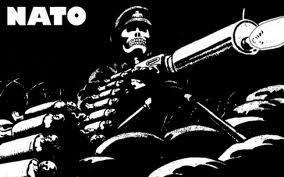 NATO was established in April 1949. It's a US imperial tool. It's been this way from inception. Washington provides the lion's share of funding. It's around 75%.

Claiming a NATO "political and military alliance for peace and security" doesn't wash. It never did. It's polar opposite truth. NATO's mission is offense, not defense.

It launched an arms race. War profiteers benefitted hugely. Napoleon once said: "Men are moved by two levers only: fear and self-interest."

What began "as a cold war provocation against a non-existent Soviet threat (now) invent(s) or exaggerat(es) threats from so-called failed or rogue states, Islamic fundamentalism and cyber-terrorism."

They comprise nearly one-third of world nations. NATO plans exponential expansion. It wants new members and partners on all continents. It wants them virtually everywhere.

It's Washington-led. It's a global killing machine. It wants all adversaries and potential ones eliminated. It wants unchallenged world dominance.

They rallied under the slogan "No to War - No to NATO." They called NATO an obstacle to world peace. They issued a public statement, saying:

NATO "is a vehicle for US-led use of force with military bases on all continents, bypassing the United Nations and the system of international law, accelerating militarization and escalating arms expenditures."

"To achieve our vision of a peaceful world, we reject military responses to global and regional crises. We refuse to live under the terror of nuclear weapons, and reject a new arms race."

Bogus threats justify the unjustifiable. Enemies are invented when none exist. They're pretexts for aggressive wars.

They follow one after another. Multiple ones continue at same time. New nations await targeting.

A permanent state of war exists. World peace is threatened. Bosnia 1995 was NATO's first war of aggression. In 1999, raping Yugoslavia followed. So did war on humanity through today.

Most world nations are allied militarily with America and its NATO allies. US Africa Command (AFRICOM) alone includes 53 nations.

Dozens of countries partner in America's wars. Since 1999, they included air and ground conflicts on three continents - Europe, Asia and Africa.

Will more European war follow? Will US-led NATO dare risk it with Russia? Will South America be targeted? Will Venezuela be ground zero?

Will war on humanity destroy it? Will lunatics making policy risk it? Conditions today are incendiary. World peace was never more threatened.

Weapons used then were toys compared to now. Humanity could be annihilated in 24 hours or less. The insanity of potential nuclear war makes the unthinkable possible.

Roberts says we're "again on the road to World War." The "drive (toward it) is blatantly obvious." Big Lies precipitating global conflict are "obvious."

Obama lied saying contingency plans must be "updated" to assure "we do more to ensure that a regular NATO presence among some of these states that may feel vulnerable" to Russia.

No threat whatever exists. America and its rogues allies alone threaten world peace. Their agenda goes all-out to prevent it.

Millions of corpses bear witness. NATO Secretary General Anders Fogh Rasmussen is a US imperial stooge. He regurgitates what his US masters tell him.

Military cooperation with Ukraine will be enhanced, he added. On April 1, Reuters headlined "NATO plans support for east Europeans worried about Crimea."

It switched headlines midday to "NATO sees no sign of Russian pullback from Ukraine border."

On April 1 and 2, NATO ministers met in Brussels. They examined "options ranging from stepped-up military exercises and sending more forces to eastern members states, to the permanent basing of alliance forces there…"

How dare Moscow locate its territory close to NATO military installations, it suggests.

You'd never know it from how intensively he's bashed. He's an obstacle to unchallenged US global dominance.

He's the best chance around to prevent it. He deserves praise, not condemnation.

He deserves Nobel Peace Prize recognition. He deserves what only war criminals get. Obama is Exhibit A.

He claims no intention in intervening militarily in Ukraine. He's a serial liar. He broke every major promise made. His word isn't his bond.

He represents the worst of rogue leadership. His conspiratorial partners share responsibility. Wrongfully claiming Russia seized Crimean is a rallying cry for war.

Germany is more belligerent than any time since WW II. It's considering sending warplanes to patrol Eastern European airspace.

"They will talk about…what more can be done to amplify the measures that have been taken already and to sustain them over time so that these measures are not simply short-term gestures," he said.

Preparing for was takes time. Perhaps plans were drawn to wage what Paul Craig Roberts calls the "final" one.

A nonexistent Russian threat is being hyped provocatively. America's sordid history is long and disturbing.

Enemies are invented. They're pretexts for war. Permanent ones reflect official US policy.

The late Gore Vidal once said "our rulers…made sure that we are never to be told the truth about anything that our government has done to other people, not to mention our own."

Historian Harry Elmer Barnes (1889 - 1968) worried about disturbing trends. If they continue, "we shall soon reach this point of no return, and can only anticipate interminable wars, disguised as noble gestures for peace," he said.

He called a third world war inevitable. A "strategic nuclear war," he said. "I do not believe anything can be done to prevent it."

"The international system is simply too unstable to survive for long." America bears full responsibility. Rogue European, Israeli and other conspiratorial partners share it.

Escalating tensions makes the unthinkable possible. Obama itches for more war. His entire tenure reflects it. He waged multiple and direct ones from day one to now.

They're wars of choice, not necessity. They lawless acts of aggression. They continue out-of-control. He's got lots more targets in mind. Imagine challenging Russia belligerently.

Imagine what no previous US presidents dared. Imagine lunatics doing it for unchallenged power. Imagine the worst of all possible outcomes. Imagine risking mass annihilation.

The road to hell is paved with megalomaniacal ambitions. Whether or not Nero fiddled while Rome burned pales in comparison today's threat.

Incendiary geopolitical global conditions exist. They're worse than any time since WW II. They're real. It bears repeating. At stake is humanity's survival.

Obama risks destroying it entirely. East/West global war is the surest way to do it. His agenda heads increasingly closer to waging it.

It's hard imagining anything more reckless. Stopping him before it's too late matters most. Humanity's survival depends on it. What greater priority than that.

On April 1, NATO suspended all military and civilian cooperation with Russia. It did so based on lies relating to Ukraine. A statement said:

"We have decided to suspend all practical civilian and military cooperation between NATO and Russia."

"Our political dialogue in the NATO-Russia Council can continue, as necessary, at the Ambassadorial level and above, to allow us to exchange views, first and foremost on this crisis."

US-led NATO blames lawlessly targeted countries for its crimes. It's "implement(ing) immediate and longer term measures to strengthen Ukraine's ability to provide for its own security."

It's not threatened. It doesn't matter. NATO wants greater encroachment on Russia's border. It wants it provocatively targeted.

It wants long range nuclear armed missiles targeting its heartland. It wants what no responsible threatened leader would tolerate.

Perhaps it's to goad Russia into belligerent confrontation. Perhaps it's for what Paul Craig Roberts calls "final" war.

Hegemons operate this way. America exceeds the worst of all earlier ones. Obama heads the world's most ruthless one by far.

World conquest involves lots more death and destruction he has in mind. It means eliminating all rivals and potential ones.

It may end up destroying planet earth to own it. Perhaps nothing will be left worth fighting for.