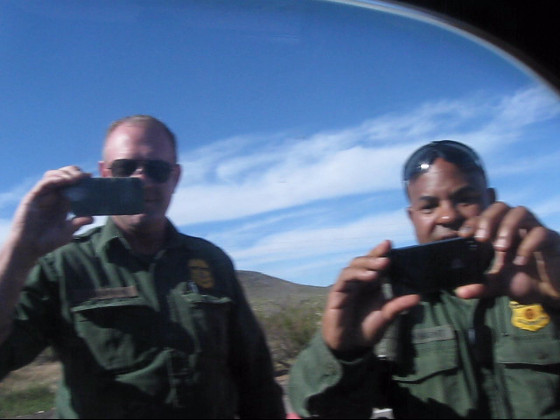 [Update] The single state charge of "stopping unnecessarily on the highway" leveled against Checkpoint USA while being detained by federal agents next to two stops signs at a federal roadblock along SR-86 in Southern Arizona was dismissed today (Monday July 1st) when citing PCSD Deputy Thomas Audetat failed to appear in court. More to come later....

On Monday July 1, 2013, I'll be back in Pima County Justice Court defending myself against a bogus traffic citation issued on March 29, 2013 at the SR-86 Milepost 146.6 CBP roadblock. The citation was issued by Pima County Sheriff Deputy Thomas Audetat, badge #6312, at the beheadst of CBP Agent J Grayson for allegedly stopping unnecessarily in the highway, a violation of ARS 28-871A. This despite the fact, I was stopped in accordance with two stop signs placed in the highway and by CBP agents who ordered me to stop.

Deputy Audetat wasn't interested in hearing the facts however given that he was on special assignment with CBP via Operation Stonegarden, a federal program which, amongst other things, pays local law enforcement officers time and a half to be at the beck and call of federal agents harassing domestic traffic inside the country.

If all this sounds familiar, that's because it is. Back in 2009, I was similarly harassed by TOPD Officer Carrasco who was responding to a call for assistance from CBP Agent Roman at this same roadblock complaining about me blocking traffic while detaining me in that same lane of traffic. Carrasco obeyed his federal handlers and wrote me a citation for impeding traffic, a citation I quickly dispensed with in court a few months later.

In anticipation of the upcoming civil traffic hearing, I submitted a Motion To Dismiss last week. Feel free to read the motion for more details regarding this incident. I'll be writing more about the incident in the near future but the motion provides a good overview of what to expect & reveals the ridiculous nature of the alleged violation.
[Update]

For those having trouble downloading the pdf version of the motion, I've included the text below:

BTW, did you ask for and receive Deputy Audetat's business card?

Hummm.  I would have requested a bench warrant be issued for his arrest by the judge and have him dragged before the court.   That happened when a friend of mine chose to fight a ticket issued to him for his kids throwing rocks at cactus in a park.  Cop didn't show.  Judge called cop.  Cop said it was his day off which angered the judge.  Judge had him arrested and dragged before the court.   My friend said he was there all day but it was worth it.  When the trial was finally conducted in the end the judge told the cop he didn't believe him and found my friend not guilty.  File a complaint with the Sheriff's office and the Professional Conduct Board (Peace Officer's Certification...whatever it is called) for malfeasance of office in not appearing before the judge....

So how did it go?

I've updated the article with the text of the motion to dismiss for those having trouble downloading the pdf version.

Marc should be able to figure out how to counter-suit with domestic terrorism charges against the officers.

Failure to genuflect sufficiently quick = domestic terrorist.   It's the law!  ;-)