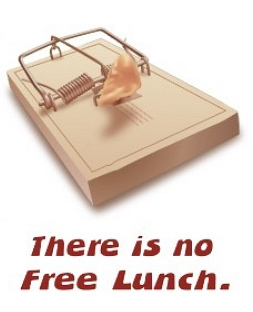 We are all irritated when we hear some light thinker blowing off about such and such product or service being "free, 'cause the government pays for it'". What is even more irritating is that the person making such an ill-informed statement may just as well be a college graduate as a high school dropout. It is well established folk wisdom (a "meme", if you will) that the government provides many goods and services for free or at low cost.

Dr. Friedman, in his book, There's No Such Thing As a Free Lunch, (TINSTAAFL - originally formulated by Alvin Hansen, apparently) warns us that ". . . every bit of pork, every subsidy, every inflation, every politically-imposed inefficiency, is paid for, and paid for in full -- by somebody" (quoted from the book jacket).

I suppose that is a true statement. Unfortunately, the last part, "by somebody", which makes this quote true, doesn't satisfactorily challenge the commonly held belief that "it is free, since the government has paid for it or will pay for it". It is obvious from the start that many who receive these free things from the government are not the "somebodys" that actually pay the bill.

Government Goods and Services Really are Free -- to me

Let me be very careful in the claims I am making here. For many people, the concept of individual benefits vs. group benefits is difficult. The TINSTAAFL statement is actually talking about a group -- a large group, the total citizenry of a country and a few others around the world. In that sense, the statement is probably true. But let us not talk about the whole country for the moment, let us just talk about you and me.

Looking at the world from a personal perspective should not be so hard for that is what a rational person does instinctively day in and day out. We try to look after ourselves first, our family second, then community, etc. For most of us, sacrificing for the country's welfare is way down on the priority list. I'm not saying that is the way it ought to be, I'm just saying that self-interest -- not group-interest -- is a fact of life (see my essay, "The Common Good And The Voter's Paradox").

Then let me proceed with the claim that "Government Goods and Services Really are Free -- to me." How can this be? Well for several reasons but the primary one is that my receipts from the government and my payments to the government are two separate, independent, and uncorrelated events. When I receive a "public good" from the government such as clean rivers or "Homeland Security", I receive no invoice from them. Just as important, when I pay my taxes every April, there is absolutely no indication as to where my money will be spent nor do I have the slightest choice in the matter.

Therefore, to say that what I pay to the government is somehow related to what it gives me has about as much correlation as "making a wish on a star" will help me get my losses in the stock market back. There is no correlation between taxes paid and services received and it was designed that way on purpose.

Another reason why public goods are effectively free is that, more often than not, one group receives the benefits while another pays, at least to some extent. For example, I am told that what I pay for city pick up of garbage is far less than what it actually costs. The same goes for my college education. Apparently, someone else is picking up part of the tab for these very useful services. I'm sure the politicians have their reasons for billing someone else for the recipient's received goods.

Of course, what I am talking about is what the political philosophers call "public goods" (or, in any case, low cost or free goods available to some citizens). True public goods, such as clean air and flood protection (levees) can't be excluded from any individual, by definition. But other government provided goods that do not precisely meet the philosopher's definition of "public goods" are still free, at least to certain individuals or classes. The G.I.Bill is a good example which I received (partially) as a gift from the taxpayers. Yes, I have paid taxes all my life but those taxes would have been the same even if I had never received a penny from the G.I. Bill.

A few years back, the small town I live in decided to buy computers and sophisticated communications for the police cars. If the city was run the way most private organizations are run, they would have made a pitch to the local taxpayers as to why the new gadgets were needed, presented us with the estimated cost, and we would have voted on it. More than likely, presented in that way, we would have said that the police really don't need those really expensive toys.

But it didn't happen that way at all. Instead the local newspaper announced that the equipment was being installed and was being paid for by a grant from the federal government. That is, the stuff that we probably would not have purchased if we had had to pay for it, was given to us! Yes, given. Even if you insist that the whole country paid for it and that our little town, since it has been unsuccessful in seceding, is also part of the country, you surely can see that our proportional cost is so low as to be insignificant. By either argument -- uncorrelated payments and receipts or countrywide sharing of costs -- we got one heckofa deal! Too bad we didn't really need it all that bad...

So, here's the scam: I pay taxes and you pay taxes. Instead of being paid locally where I could maybe have some say on how much and what it is spent for, it goes to the Federal Government. There, after taking out a huge chunk for "overhead", it is doled back to the states and/or cities where we get to buy fancy gadgets for the police, junk for the schools, expensive "city" water systems for folks that chose to live way out in the country (like me!), and D.A.R.E. programs for the teenagers with heads of mush. The receipts and payments are intentionally made very distant from each other for reasons that we don't have room to discuss in this essay.

In summary, then, for all practical purposes, "public goods" and other government services are free or nearly so. The portion of my education paid for by the G.I. Bill cost me nothing and cost you nothing (marginal cost was zero). Your tax bill and mine would have been the same whether I took advantage of that "free" offering or not. The same goes for the Mississippi river levees that keep back the floods, the millions of books available to be via my local library, the weather service that will tell me of the coming storm (often before they arrive), the "public schools" babysitting our children, and the nights I can sleep like a baby knowing that the terrorists have all been blown up or secretly stashed away somewhere. The marginal costs for all these wonderful things are zero.

On the other hand, a rather excessive amount of my income and personal wealth is forcibly extracted from me on a continuing basis for which I, marginally, receive nothing. That is, my bill would be the same even if -- like some good libertarians -- I took nothing from the government.

Many who have patiently listened to these arguments before have objected that the attitude that "what the government offers is really free" is bad. Typically, they say, "What if everyone had the attitude that it really is a 'free lunch' and we might as well go for it? Is that not a disastrous attitude for society?" Well, yes. What is best for the individual is often worse for the group as is classically illustrated by the "Prisoner's Dilemma" scenario. However, I find that many of those who make this criticism are not consistent in their own actions. That is, while they might go to the expense of voting, which has no personal reward, but is supposedly good for society, they have no hesitation in selling their IBM stock. What's wrong with that? Well just think about what would happen to all the little old ladie's lifetime savings invested in IBM stock if almost everyone followed the example and also sold their stock.

Of course, rational freeriding contributes greatly to the ultimate collapse of a wholesome society. Then, what can be done to avert this seemingly inevitable tragedy? In my humble opinion, laws, rules, and force -- the usual political tools -- will never solve the problem. No -- if it is to be solved -- trust, honor, responsibility, compassion and individual responsibility must once again become a desirable and respected part of our culture.