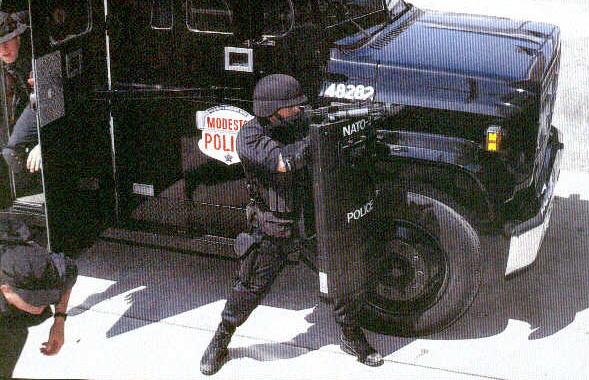 Chicago police have an odious reputation for brutality. It's well deserved. On Sunday, it showed up forcefully. The whole world watched.

"In 1968, the Democratic Party came to the City to nominate a president. What happened then became a part of Chicago's history: a massive public uprising of protest against an unjust war and a corrupt political system that created a massive local reaction within the City's police department. Violence and chaos resulted."

Forty-four years later things went from bad to worse. Imperial wars rage out of control. Obama, the peace candidate, itches for more. Belligerent nations never run out of targets or reasons to attack them.

The business of America is war. Congressional affirmation assured it.

In September 2001, Congress approved the Authorization for Use of Military Force (AUMF) for "the use of United States Armed Forces against those responsible for the recent attacks launched against the United States."

Carte blanche war-making authority was granted. America's war on terror began. It rages out of control at home and abroad.

"(1) the United States is engaged in an armed conflict with al-Qaeda, the Taliban, and associated forces and that those entities continue to pose a threat to the United States and its citizens, both domestically and abroad;

(2) the President has the authority to use all necessary and appropriate force during the current armed conflict with al-Qaeda, the Taliban, and associated forces pursuant to the Authorization for Use of Military Force (Public Law 107-40)...."

As commander in chief, presidents can wage wars anywhere at their discretion. One follows another. Congressional budgets prioritize them.

Thousands of Chicagoans want current policies changed. So do millions nationwide and globally. Pacifism is unacceptable against sovereign evil.

Orwell said in "times of universal deceit, telling the truth becomes a revolutionary act." His 1984 newspeak slogan was: "War is Peace. Freedom is Slavery. Ignorance is Strength."

NWU added that it "Defends the First Amendment: No Restrictions On Peaceful Public Communication, Assembly and Dissent."

"Our constitutional rights are vastly more essential—more critical—than any efforts to secure the comforts and the privilege for the elites gathering for the NATO meetings."

"We are appalled at the efforts by Mayor Rahm Emanuel and his Administration, backed by the Chicago City Council, to limit the ability of people to speak truth to power, and to be able to  indicate the depth and intensity of their disgust at the on-going wars initiated around the world by NATO (North Atlantic Treaty Organization) and the U.S. Government, under control by both the Democrats and Republicans, who will soon be meeting in Chicago."

On Sunday, the Chicago Tribune headlined "Injuries, arrests in clashes between protesters and police," saying:

Confrontations led to dozens of injuries and arrests. For two hours, police, in "full riot gear," faced off against fed up protesters wanting change.

On Sunday evening, a "pitched battle" between "an overwhelming number of police and several hundred protesters" occurred near McCormick Place, NATO headquarters.

"The police are going to move us off the street. We've been telling you this would happen. We went to a lot of trouble to make sure this march was a safe and peaceful march."

"You are hereby ordered to disperse. If you fail to comply you may be arrested or be subjected to other police action."

From then on, things deteriorated. Perhaps cops were spoiling for a fight. Who can know. Either way, they got one. In full battle gear, they're advantaged. They don't hold back.

Protesters were struck and fell. A nearby detention area was readied in advance. Police vans and buses were positioned nearby. Dozens were handcuffed and arrested.

"They start with lies and continue with lies," she told them. "I'm proud to be here."

Iraq and Afghan veterans also came. Some spoke against wars. Around 40 others gave back medals. They handed them to NATO representatives.

In April 1971, he testified before the Senate Foreign Relations Committee. He belonged to Vietnam Veterans Against the War (VVAW). He told committee members:

He came to discuss an investigation involving "over 150 honorably discharged and many very highly decorated veterans." They later confessed to war crimes. He recounted harrowing examples.

They "personally raped, cut off ears, cut off heads, taped wires from portable telephones to human genitals and turned up the power, cut off limbs, bl(ew) up bodies, randomly shot at civilians, razed villages (like) Genghis Khan, shot cattle and dogs for fun, poisoned food stocks, and generally ravaged the countryside of South Vietnam in addition to the normal ravages of war, and the normal and very particular ravaging which is done by the applied bombing power of this country."

He called America's involvement in Southeast Asia "the height of criminal hypocrisy."

He now chairs the Senate Foreign Relations Committee. In 2001 and 2003, he supported imperial wars on Afghanistan and Iraq.

In May 2011, he, John McCain, Joe Lieberman, and three other senators co-sponsored S. 194: A Resolution expressing the sense of the Senate on United States military operations in Libya.

Dishonor replaced doing the right thing. He's one of the Senate's richest members. Wealth and power makes people want more by any means.

On May 19, NATO's opening ceremony included a minute of silence for fallen servicemen and women. A bugler played taps. Obama, an unindicted war criminal multiple times over, bowed his head.

NATO calls itself a "political and military alliance for peace and security." It was always for offense, not defense. Cold War hysteria was its pretext to exist. Terrorism replaced communism.

Threats are hyped to wage wars for dominance and resource control. NATO deplores peace and security. It threatens it and human survival.

Chicago protesters and many others know the threat. They want an organization this dangerous disbanded. They want America's resources used peacefully for vital homeland needs.

They want humanity given a chance to survive. Odds are long unless NATO's global menace ends.