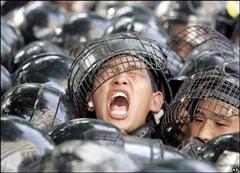 Their tactics include no-holds barred surveillance, vigilantism, and brutality. They're infamous for physical confrontation, flagrant abuse, and criminal assaults.

From 2002 - 2004 alone, over 10,000 complaints were lodged. Many involve violence, brutality, even torture and murder. Only 18 disciplinary actions followed.

It focuses on criminal justice issues. Its aim is improving police accountability and the nation's criminal justice system. It faces long odds as America grows more repressive. Police behavior during Chicago's NATO summit is Exhibit A. More on that below.

Disadvantaged Blacks, Latinos, poor, and street demonstrators are most affected.

It called Chicago police a "regime of not knowing." They even get away with murder because of "a deep commitment to the machinery of denial." A culture of silence is encouraged and enforced.

• in over 85% of cases, accused officers aren't even interviewed, except for a brief form report;

• top officials are most responsible for cultivating and supporting a violence-prone system.

In October 2009, it published a 10-year analysis of Chicago Police Board (CPB) cases and decisions. It examined charges filed and rulings. It covered the period January 1999 - December 2008.

It found a "startling difference in outcomes experienced between civilian employees and sworn officers." Disciplinary action against police offenders is lax and undisciplined. Few are punished. Brutality is whitewashed. Serious flaws remain uncorrected. Justice is denied.

In April 2012, CJP reported a "very sad reality." Most police violence complaints are denied. Chicagoans "continue to be frustrated with" unaccountable practices.

Systemic issues remain uncorrected. City officials come and go. Abuses continue. Accountability mechanisms exist but aren't enforced. "The reality is that (for) most types of misconduct....there is little to no way to prove definitive guilt" because no one with authority wants to hear it.

On May 9, CJP headlined "NATO & All the Unanswered Questions," saying:

Ahead of NATO's arrival, little attention was paid to likely police tactics. Local media scoundrels ignored serious unanswered questions. "It seems like the Chicago press are not really interested unless they are taking it from a CPD press release."

CJP listed a menu of questions demanding answers. Most important are ones related to just treatment for nonviolent demonstrators while cops focus on serving NATO.

The fact that local media fell woefully short "is a scary proposition, especially when you consider the history of the CPD and at times their proclivity to misuse weapons" and commit systematic violence against ordinary Chicagoans with impunity.

It's still not ready. It proves it daily on city streets. It serves and protects wealth and power. Ordinary Chicagoans are unprotected and abused. Police brutality victims know best. Their stories are chilling.

On May 20, the Chicago Tribune headlined "Police, protesters clash in Loop," saying:

A police van struck one protester. Someone screamed: "They hit him! They hit him!" An ambulance took "someone in a wheel chair" to a local hospital. Friends identified him as New York-based OWS activist Jack Amico.

Hotels domiciling heads of state and their entourages are heavily protected. Nothing is spared to serve them. "Asked how he was holding up, one protester (said): 'Exhausted.' "

Earlier Saturday, police and activists clashed downtown "when protesters tried to push through a line of police on bicycles. An officer went down." Other riot-clad ones moved in violently. Several arrests followed.

Each time marchers tried veering from where cops directed them, confrontations occurred. Thousands of police were everywhere downtown. They came riot-clad in groups, phalanxes, on bikes, horseback, squad cars, and overhead in helicopters.

In fact, momentum increased. It continued all day through late evening. Number grew. Sunday may prove most daunting. Large protests and marches are planned.

Participants know what's ahead. They're struggling on two fronts - against NATO and Chicago cops protecting global menace participants. Why else would they brave notoriously violent police for ending wars and justice.

On May 19, The New York Times headlined "3 in Chicago Face Charges of Terrorism in Protests," saying:

"The People of the State of Illinois v. Brian Church, Jared Chase (and) Brent Betterly" alleged possession of incendiary devices, material support for terrorism, and conspiracy to commit it.

Charges are spurious. National Lawyers Guild (NLG) attorneys denounced them. Sarah Gelsomino "delore(d them) in the strongest degree." No evidence whatever proves them.

NLG's Michael Deutsch called them "propaganda to create a climate of fear and to create this public perception that protesters are violent."

The Times said defendants were targeted in early May. They and others were arrested "when police officers and FBI agents obtained a no-knock search warrant" to raid a South Side apartment.

NLG lawyers said police "broke down doors with guns drawn and searched residences without a warrant or consent."

According to The Times:

They "were to be used in attacks against police stations, which would divert attention from other attacks around the city."

Official police and prosecutor accounts were cited. They're baseless without credibility. Charges are fabricated with no corroborating evidence. The pattern repeats constantly. As a result, many hundreds rot unjustly in America's gulag.

Yet The Times said "defendants also (planned) to buy several assault rifles and build a pipe bombs at the time of their arrests."

"Throwing stars, swords with brass-knuckle handles, a hunting bow, a shield with protruding nails, gas masks and a map with details of escape routes from the city were also said to have been found in the apartment."

All are well protected, especially leading up to, during, and for days after National Special Security Events. How three youths planned doing this wasn't explained. For attacks this elaborate, a battalion or more would be needed with plenty of backup.

"The individuals we charged are not peaceful protesters. They are domestic terrorists."

Another arrested but uncharged activist said:

"They raided my home illegally to intimidate us, and to stop us from doing the important stuff we were doing."

No one arrested planned terrorism or other violent acts. Nonetheless, the so-call NATO 3 face a harrowing ordeal ahead. Few charged with these type offenses end exonerated.

Even if found not guilty, new charges likely follow. When federal, state and local prosecutors want someone convicted, results usually turn out that way no matter how long it takes.

Sometimes one or more trials are protracted. Including appeals, resolution can take years. The cost burden is enormous. Proving innocence is daunting when government determines to convict.

"Good call," it added in response to nonviolent activists charged with terrorism. They face long prison terms if convicted.

They proved it with warrantless break-ins, bogus charges, false arrests, baton swinging violence, other aggressive confrontations, and running down one activist with a van.

Perhaps they're saving their heaviest-handed tactics for Sunday when large rallies and marches are held. Low intensity conflict may follow throughout the day and evening.

Participants and downtown residents fear the worst. Our neighborhoods may become battlegrounds.