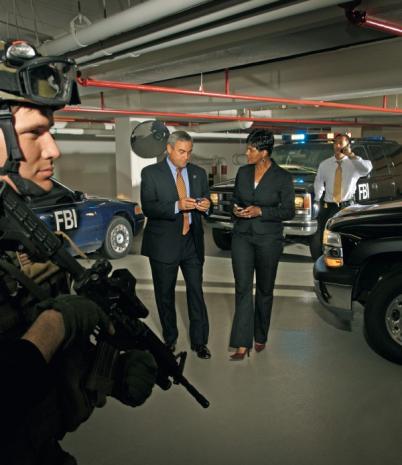 Ready or not, NATO arrived on May 19 and 20. Chicago's in virtual lockdown. Residents feel occupied. Building occupants got special instructions.

This writer's residence advised "leaving town between May 18 - 22." Otherwise limit city travel. Have essentials on hand, including food and water. Consider working at home. Avoid certain parts of the city. Observe curfew and other mandates.

No large deliveries will be allowed. Special precautions are being taken. Visitors must have verifying photo IDs. Vehicular restrictions will be enforced. Portions of the building will be locked and inaccessible. Avoid large gatherings if at all possible. Stay close to home.

In early May, CBS local affiliate Channel 2 reported that "the government is informing small plane pilots that if they enter (a restricted) no-fly zone during the summit, they might be shot down."

The FAA established flight advisory rules. Non-commercial aircraft are prohibited from flying within 10 nautical miles of downtown at altitudes below 18,000 feet.

Restrictions also include an outer perimeter extending 10 - 30 miles around Chicago. All aircraft violating flight restrictions will be intercepted. The advisory states:

"The United States Government may use deadly force against the airborne aircraft, if it is determined that the aircraft poses an imminent security threat."

"Be advised that noncompliance with the published may result in the use of force."

O'Hare and Midway Airports are affected. So are small suburban ones. Around a dozen overall face restrictions. When Obama arrives, he'll be well protected downtown. So will other heads of state and their entourages.

Police may confront protesters violently. Local residents were warned to stay away. For many, conducting normal activities will be nightmarish. With dozens of motorcades coming, so will traffic.

Occupy Chicago, other OWS participants, Veterans against War, immigrants and environmental rights groups, National Nurses United, CANG8, unions, and other organizations marched on May 1 under the slogan:

"They are Detaining Us. They are Shutting Down our Clinics. They are Closing our Schools. They are Taking our Wealth. They are Busting our Unions."

On Monday, May 14, protesters began "A Week without Capitalism." Dozens of Catholic Worker movement members demonstrated outside Obama's campaign headquarters. Several were arrested.

On Friday, National Nurses United and Rage Against the Machine rallied downtown in Daley Plaza. At issue are medical service cuts and demands to tax Wall Street.

Planned weekend events are numerous. Local groups, students, environmental activists, bikers, Planet over War, and other planned demonstrations will march, hold rallies, and feature local speakers. Participants have been briefed to maintain nonviolence no matter what confronts them.

Chicagoans are braced for "a little pomp, a little circumstance, a lot of inconvenience, a splash of spring colors, a maze of barricades, street and museum closings, and a loud exercise of that most American of rights guaranteed by the First Amendment."

Some will take part in planned activities. Others will protest against a laundry list of crimes, abuses, and neglect nonviolently. Until Friday, demonstrations were small.

Through the weekend, the dynamic will change markedly. Tens of thousands on both sides converge on city streets, parks and plazas. Secret Service contingents were out in force. So were state police, National Guard forces, and thousands of Chicago cops.

"All persons may speak, write and publish freely, being
responsible for the abuse of that liberty. In trials for
libel, both civil and criminal, the truth, when published
with good motives and for justifiable ends, shall be a
sufficient defense."

Section 5 affirms the "RIGHT TO ASSEMBLE AND PETITION," saying:

"The people have the right to assemble in a peaceable
manner, to consult for the common good, to make known their opinions to their representatives and to apply for redress of grievances."

"There is no question but that many officers acted without restraint and exerted force beyond that necessary under the circumstances."

"The leadership at the point of conflict did little to prevent such conduct and the direct control of officers by first line supervisors was virtually non-existent."

Mayor Richard J. Daley ordered police to "shoot to kill arsonists and shoot to maim looters....As long as I am mayor of this city, there's going to be law and order in Chicago."

On August 22, an unarmed protester was shot to death. Brutal beatings occurred all week. Journalists as well as protesters were attacked. Many dozens were treated at local hospitals. Hundreds were arrested.

Senator Abe Ribicoff interrupted his George McGovern nominating speech to denounce "Gestapo tactics on the streets of Chicago." If anti-NATO violence occurs, expect no leading politician to replicate him.

Chicago cops specialize in doing it violently. Their reputation is ugly and notorious.

On May 18, Chicago Sun Times columnist Lynn Sweet headlined "Whose drone is it? US Military providing support for Chicago NATO Summit," saying:

On Thursday, "a preemptive police raid took place at approximately 11:30pm Wednesday in the Bridgeport neighborhood, and instances of harassment on the street, in which Chicago police are unlawfully detaining, searching, and questioning NATO protesters."

"The Bridgeport raid was apparently conducted by the Organized Crime Division of the Chicago Police Department and resulted in as many as 8 arrests."

Witnesses said cops burst into a six-unit apartment building violently with no search warrant. Doing so is illegal. They entered an apartment guns drawn. One tenant was tackled in his kitchen. Two were handcuffed for two hours in their living room while police searched their apartment and a neighboring one.

Repeatedly they called one tenant a "Commie faggot." A search warrant produced four hours later had no judicial authorizing signature. Beer-making supplies and one or more cell phones were seized.

"Preemptive raids like this are a hallmark of National Special Security Events. The Chicago police and other law enforcement agencies should be aware that this behavior will not be tolerated and will result in real consequences for the city."

Expect lawsuits to follow. What's next is uncertain. Settlements may include monetary payments to plaintiffs.

In another downtown incident, three plainclothes cops lawlessly stopped, handcuffed, searched, detained, and interrogated a NATO protester. No probable cause justified it. The subject refused to answer all questions. Hours later he was released.

NLG got reports of at least 20 other arrests. Some remain in custody. Los Angeles immigrant rights activist Danny Johnson was accused of assaulting a police officer during a protest rally and arrested. Witnesses contradicted police accusations.

Throughout the weekend, NLG staff remain on call to provide legal services for anyone mistreated or arrested. Scores of NLG observers are deployed on streets. They'll record police misconduct firsthand.

2 Comments in Response to Chicago Militarized for NATO

I would love to see a cop,like the one in this picture fire on someone just to find out that it was his mother.Look at that thing would ya...pure,Braid Dead...Does anyone know that guy,or worse yet live near him? If so the least you should do is get a Bad Dog.Just look at him..the gun,the gloves,the jacket,and the way he is holding that weapon...he is ready to Kill If Told To,and all someone has to do is tell him,and he will KILL.Cops in America are Sick People,very SICK INDEED.I hope your father,or, mother isn`t one of them..just look at this guy...pure evil,and he will KILL YOU IF TOLD TO,and that`s all the needs..the word to KILL,and the WILL..Is he YOUR FATHER,YOUR BROTHER,DO YOU KNOW HIM...PLEASE BE CAREFUL IF YOU DO,VERY CAREFUL OF HIM.HE WILL KILL YOU IF TOLD TO.

Look at the American Cops...they will be Americas first battle.They are willing to destroy their own children,and then go home and said children how much they love them.America is going to hell,and the American Cop is paving the road.