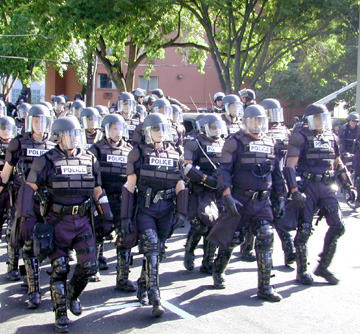 A $100 million NATO invasion is coming. Low intensity conflict may follow. The "City of Broad Shoulders" may get more than it bargained for.

Nelson Algren once called Chicago the "City on the Make." NATO's May 20/21 "on the make" invasion isn't welcome.

The Coalition Against NATO/G8 War & Poverty issued a statement, saying:

"The city has carried out a campaign to intimidate and vilify protesters, claiming that protests lead to violence. In fact, the main source of violence in the world today is the wars being waged by NATO and the US."

"We will march in May during the NATO meeting to deliver our message: Jobs, Housing, Healthcare, Education, Our Pensions, the Environment: Not War!"

"We and tens of thousands will be in the streets that day for a family friendly rally and march, with cries so loud they will be heard in Camp David and across the globe. We will be in the streets that day to fight for our future, and speak out against the wars and their cutbacks are designed to benefit the 1% at the expense of the 99% of the world."

NATO doesn't foster democratic values, liberation, and peace. It's about wars, death, destruction and human misery. It requires draconian austerity and soaring debt to support it. A Chicago-style welcome awaits.

Organization representatives fear large scale crackdowns before and during protest demonstrations. Those involved plan to repudiate confrontations. They'll also stand up for their constitutional rights.

Dozens of NATO heads of state and other top officials plan attending. Large delegations are coming with them. So are similar partner nation contingents.

Secret Service staff also will be out in force. The ACLU said they'll set up a security perimeter around McCormick Place. Part of Lake Shore Drive will be closed. It's one of the city's main arteries.

Enormous amounts of anti-scale steel fencing will be erected. Thousands of linear feet of concrete barriers will be strategically placed.

At issue are fundamental freedoms. They include speech and assembly rights. They're also about police refraining from crackdowns on nonviolent protesters.

Will Chicago respect what NATO and Washington never do on so-called "liberating" missions? Activists want to know. The city has an odious reputation. More on that below.

"Extraction teams" will snatch and grab protesters from crowds. Who for what reasons wasn't explained.

Company representatives attending were told business won't be affected. Staff won't be deterred from moving around freely. How they'll distinguish them from protesters and pedestrians isn't clear, especially in large crowds.

Occupy Chicago plans 10 protest days. A May 12 "People's Summit" will be followed by other events. Themes will highlight education, healthcare, the environment, immigration, other issues, and imperialism. On May 20, a "No to NATO" march is scheduled.

"We at Occupy Chicago," it said, "cordially invite you to join us and thousands around the world in a week of action in protest. We will highlight the connection between our local struggles, global struggles, and the policies of the thieves and oppressors of NATO and G-8."

Chicago is NATO's 25th summit. It's a first for Chicago. It may be the city's greatest ever security challenge. Before it ends, violent crackdowns may exceed past large events.

(1) "the Alliance's commitment to Aghanistan through transition and beyond;

(2) ensuring the Alliance has the capabilities it needs to defend its population and territory, and to deal with the challenges of the 21st century; and

(3) strengthening NATO's network of partners across the globe."

NATO commits to supporting Afghanistan beyond 2014. Permanent occupation is planned. It's the same wherever it shows up.

"The alliance needs to be more deployable and more adaptable, and we're taking those lessons learned from Afghanistan and integrating them into our planning going forward."

NATO also intends expansion beyond its borders. It plans building a "hub of relationships around the world." Meeting "the challenge of (alleged) global threats" assures new wars besides current ones.

NATO's an US imperial tool. Permanent wars are waged. One follows another. All involve mass killing, destruction, and enormous profits for corporate crooks cashing in. Geopolitical issues don't concern them, just bottom line priorities. America's addiction to war feeds them.

When established in April 1949, NATO called itself a "political and military alliance for peace and security." It was always for offense, not defense. Cold War hysteria incited fear to assure an arms race for profits. Reinvented post-Soviet Russia, they keep flowing.

Its original five members now number 28. They're linked with dozens of partners. Together they threaten world peace, stability, and survival.

Bogus threats justify NATO's existence. With no real ones around, they're invented. Wars are based on lies. Profits depend on them. Peace is a losing proposition. Preventing it at all costs is planned.

Ahead of and during Chicago's summit, the city will be locked down and militarized. Mayor Rahm Emanuel and police officials plan targeting strategic areas in preparation.

In January, City Council representatives enacted a "Sit Down and Shut Up" ordinance. It includes required protester group liability insurance, fines up to $2,000 for those arrested, jail time penalties, strict permit guidelines, plans to deploy thousands of police and National Guard forces, and various other requirements.

"Second to none" is Chicago's newest tourism slogan. Before and during NATO's summit, it may turn out that way, but not as planned.

Activists fear it may become a level of hell Dante forgot. Longtime residents hope not. We'll still live here when NATO's gone, and don't relish coping with its aftermath.