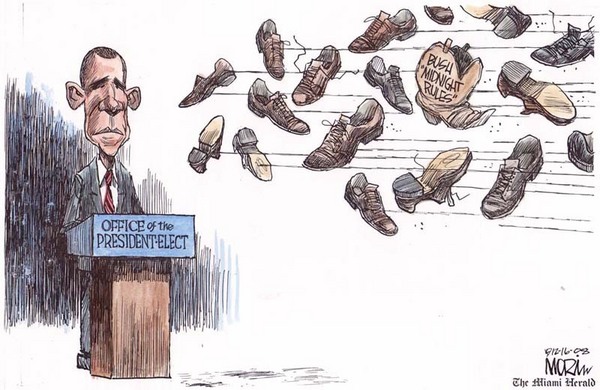 From Indonesia, the world's largest Muslim country, "President Barack Obama said Tuesday that Washington's effort to reach out to the Muslim world was earnest and would help improve security, although he acknowledged that there was still more work to do."

At a news conference with Indonesian President Susilo Bambang Yudhovono, he said, "With respect to outreach to the Muslim world, I think that our efforts have been earnest and sustained. We don't expect that we are going to completely eliminate some of the misunderstandings and mistrust that have developed over a long period of time, but we do think that we're on the right path."

On August 31, he wreaked of duplicitity declaring an "end to the combat mission in Iraq," saying:

"Throughout this remarkable chapter in the history of the United States and Iraq, we have met our responsibility."

No matter that after two decades of war, sanctions, occupation, millions of deaths and displacements, disease, and insecurity, Iraq no longer exists. Divided in three parts (the Basra south, Kurdish north, and Baghdad center), it's unsafe, corrupt, terrorized, tyrannized, contaminated, and permanently occupied like Afghanistan and wherever else America shows up, the scourge of the Muslim world.

"This kind of activity is never helpful when it comes to peace negotiations, and I'm concerned that we're not seeing each side make the extra effort involved to get a breakthrough."

More duplicity by a president who partnered with Israel's occupation project, funds its wars, supplies billions of dollars in annual aid, more on request, plus the latest weapons and technology. A president with no interest in peace or Palestinian rights. One spurning his own people, especially the poor, disadvantaged, and millions of American Muslims. Who chides Netanyahu's construction plan for 1,000 new homes in the West Bank Ariel settlement, besides 800 more in East Jerusalem (all on stolen land). Who provides annual aid to fund them. Who now extends outreach to world Muslims with policies that betray them.

Obama plans a formal November 10 address, either at the University of Indonesia or a Jakarta mosque, venues that should spurn, not welcome him. So should Seoul, South Korea when he arrives Thursday for the G-20 conference, its agenda planning exploitation, not help for global millions in need, especially victims of US imperialism and persecuted Muslims everywhere who reject Obama's rhetoric, the same fake populism his agenda exposes.

the question is this who and what is this creature

the pope and the king of spain

so now lets be clear A ALEX JONES SAYING

Talking about fake outreach, Lendman is the poster boy. As to Obama, he is clearly hiding his true beliefs to stay in the White House, but like all recent U.S. presidents his puppetmasters in Saudi Arabia tell him what to say and do about Islam, and they're the same ones who run the eternal jihad against Israel. Lendman's analysis oversimplifies the complexities of the Muslim world, since the Saudis are mortal enemies of Shiite Iran, hence Obama is giving them billions in U.S. weapons. They're also the enemies of al-Qaeda, hence the U.S. war against it. Funny how Lendman can diss Obama when he's a Saudi puppet himself.

Washington's Energetic Generals and the Emphasis on Preparation for Nuclear War

WOW! This Is A Wild Situation!