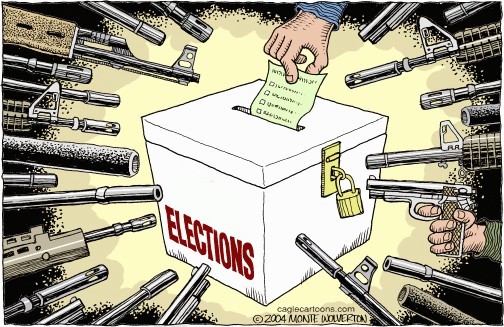 3)       Maricopa Elections Dept. has been connecting to and distributing election data over the Internet, in violation of Arizona law.[[5]]

4)       Maricopa Elections Dept uses uncertified software on the certified voting systems. These are listed in AZ law specifically as felonies.[[6]]

5)       Maricopa County blocks the public from knowing the vote totals at the precinct, instructing pollworkers to withhold results and prevents any observers from photographing the machine totals.[[7]] This is in open violation of AZ law.  In contrast Pinal County posts the “results tape” on the front door of each polling location. [[8]]

6)       Maricopa County ordered their pollworkers for all recent elections not to place the polltapes produced by the electronic voting machines (“results tapes” that should, by law, be signed) into the sealed “official returns envelope”.  This sealed envelope is to be preserved in case of a challenge.

7)       Maricopa Elections Dept. orders their pollworkers to return critical ballot materials (the “memory cartridge” electronic ballot boxes) from the polling places at the end of election day with one person only.[[9]] AZ law requires two persons to be assigned this task, one from each party.[10]

8)       Maricopa Elections Dept reports election results, combining by mail-in, precinct and provisional voting. It is easier to tamper with election results either by the precinct or mail-in votes; tampering with both to make them more or less equivalent in terms of the percentage of fraud is difficult.  If a candidate or issue wins a large majority in one type of voting and loses in the other, it’s a strong indicator of election tampering.  Maricopa County combines all the data into one total to avoid raising any inquiries into discrepancies.

These Points “Interlock” To Make A Complete Election Fraud Recipe.  If observers aren’t allowed to see the precinct data either on election night (point 5 above) or afterwards (8), and are blocked from seeing what goes on at the central tabulator (2) when it gets there on systems connected to the internet (3) on unknown, untested and illegal software (4) and the one reliable record available of precinct results (polltape) isn’t signed (1) OR put in a sealed bag for later review (6), then it’s not a proper election.  The only thing left to call it is “illegal” – and that’s what we will present to a judge.
Arizona law has set the conditions for any full recount to be the most difficult in the nation: recounts are automatically generated only when there is a 1/10th of 1% or smaller difference in election totals between two candidates or issues.  Florida is the only other state that is close to this standard, and their required percentage spreads are less stringent.  A candidate challenge is impossible, even if the candidate pays for it. This is a recipe for un-auditable election fraud [[11]].
A pattern is emerging in AZ elections.  In the case of the Maricopa LD20 (Sept 2004) election,[[12]] Election Director Karen Osborne testified that an 18% error rate on optical scanning machines was within the accepted error rate for those machines!  This same election fiasco resulted in ballots being confiscated by the FBI and never properly investigated. Regarding the Pima County court case about the disputed RTA election, a court ordered examination of the stored poll tapes from the RTA election of May 2006 showed that 44% of them were missing or didn’t match the official results.[[13]]
The Maricopa County Elections Department is responsible for the counting 56% of the total votes of the state of Arizona. Thus, subversion of the elections in Maricopa could easily result in changing the election results for the entire state in a statewide election. Therefore, a group of concerned citizens from five AZ counties, as individuals in Arizona, have filed a request for an emergency hearing to ask the court to force remedies for these violations of the law before the upcoming election on the 24th of this month. This Special Action Relief request asks for an expedited hearing to assure the upcoming election will follow election law to assure accurate results in this and all future elections in the state of Arizona.  Other relevant links: [[14]] [[15]]
Our complaint cites each violation, referring either to Arizona law or the May 2010 edition of the state-standard election procedures manual.[[16]] 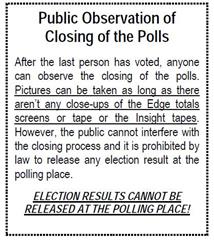 [5] “Election Management System Security” on page 87, items 6 and 7.  This publication is available at: http://www.azsos.gov/election/Electronic_Voting_System/2010/Manual.pdf

[6] The Sequoia Ballot Preparation/Printing System (BPS) – Does It Need To Be Certified by Tom Ryan, Ph.D. Arizona Citizens for Fair Elections: http://tinyurl.com/25wsqn6

[11] To get a good overview of the problems with elections in Arizona, it’s important to read the resolution with background information written by attorney Bill Risner and passed by the AZ Democratic Party Jan 23rd 2010:  This report tells it like it is from a seasoned attorney with 42 years of experience on how bad the election systems is, it’s a must read if you care about elections:  http://tinyurl.com/27mw9jn

-----------------------
John Brakey, co-founder of AUDIT-AZ (Americans United for Democracy, Integrity, and Transparency in Elections, Arizona) & Co-Coordinator of Investigations Velvet Revolution www.velvetrevolution.us
My sites with Arizona Election Integrity News  www.audit-az.blogspot.com and SEEKING JUSTICE www.seekingjusticeauditaz.blogspot.com
Tucson, AZ, 85706 Phone 520-578-5678 cell 520 339 2696 John’s AUDITAZ@cox.net
"Never doubt that a small group of thoughtful, committed citizens can change the world. Indeed, it is the only thing that ever has."   Margaret Mead
"Make yourself sheep and the wolves will eat you." -- Benjamin Franklin -
“There is no safety for honest men except by believing all possible evil of evil men.” -- Edmund Burke