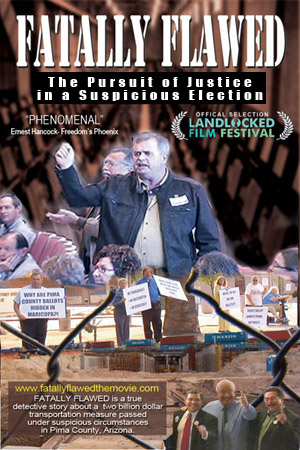 Still Voting?
This Saturday’s Movie Night will feature Fatally Flawed – The Pursuit of Justice in a Suspicious Election. This film should be seen by anyone who still votes and thinks their vote counts. More importantly, this is how “politics” works in Arizona and the United States and why no matter what party is elected, things never seem to change.

The film allows you watch events as they unfold through the eyes of seasoned lawyer and activist Bill Risner. As the story develops, it becomes evident that what initially appeared to be a public mandate to expand the city's roads was a likely case of election fraud. At every step of the way, citizens seeking answers are met with resistance from election facilitators, local politicians and even the State's own attorney general. Persistent unanswered questions generated by the lawsuit and new evidence of wrongdoing on the part of elections division personnel led to an equally suspicious investigation by the Arizona attorney general. This investigation culminated in a recount conducted under conditions that made meaningful public oversight impossible.

In a heated confrontation with county supervisors, investigator John Brakey says: “This is not about just Pima County. It's about our country.” The problems with local elections divisions that are exposed in this film are taking place throughout America. Fatally Flawed is a story about citizens fighting to regain the integrity of elections who share the ultimate goal of election transparency.

If this film doesn't make you want to get involved to take back our country from the dominant criminal minority -- the looters of the wealth and everything that is good about this country -- pick up your TV's remote control, sit back down on the couch, and go back to sleep!

For more information visit www.FatallyFlawedTheMovie.com. Although we are not authorized to copy and distribute this movie at this time, the DVD will be available for purchase for the sum of $20 from the maker of the film.

***UPDATE***
I have just confirmed that John Brakey and Jim March of AUDIT-AZ Will be attending and will be explaining this issue to everyone's satisfaction! This should be very informative so DON'T MISS IT!

The Individual Solution To Avoiding The Great Reset And Totalitarianism