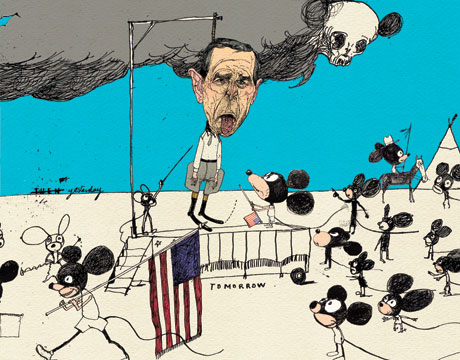 Public Anger and Distrust of Business and Government - by Stephen Lendman

An April 2010 Pew Research Center (PRC) for the People & Press study and others report growing public anger, distrust, and hostility toward business and government because of a "perfect storm of conditions" - wrecked economies, fueling "epic discontent" toward responsible officials.

PRC found nearly 80% of Americans don't trust government to do the right thing, the highest distrust level in half a century, this writer's April 28 article, titled "Growing Public Anger in America," discussing its findings, accessed through the following link:

People want help when they most need it, but aren't getting it, privilege always trumping the public interest, getting more extreme in America, Canada, and throughout Europe, a prescription for greater outrage, perhaps fury for beneficial change.

It bears watching as the deepening global depression plays out, throwing millions more to the wolves, abandoned by fiscal harshness, governments protecting business, not their people.

"More than ever, Americans do not trust business or the people who run it," according to pollsters, researchers, and corporate bosses feeling the heat, yet "bent on destroying the environment, cooking the books and lining their own pockets" ad infinitum in good and bad times.

"There is a sense that business is a zero-sum game, that if companies are making a lot of money, it must be coming out of someone else's pocket."

"The secret of a great success for which you are at a loss to account is a crime that has never been found out, because it was properly executed."

He meant behind every great fortune lies a crime, far greater today on a global scale, but just as harmful to those hurt.

In a Roper July/August 2005 poll, 72% of respondents said wrongdoing was widespread in industry, only 2% feeling corporate bosses are "very trustworthy," 9% having full trust in financial institutions, one executive saying the term "crooked CEO is redundant."

In a November 2005 Harris poll, 90% of respondents said corporations have too much influence in Washington, 68% believed the media are too powerful, few expecting government to intervene and help.

In his April 26, 2010 Forbes.com article, Brian Moriarty headlined, "Why Everyone Distrusts Both Business and Government," saying:

"Since Gallup began measuring public trust in 1976, 19% of people polled have held a 'very high' or 'high' opinion of the honesty and ethics of business executives. Public trust of congressmen has been even feebler, averaging just 15%," an all-time low reached in 2008 at 12% for both, unsurprising in the post-bubble economy, the 2009 Edelman Trust Barometer saying 84% of the public blames business, 81% government and regulators they appoint.

In their "Handbook of Organizational Performance: Behavior Analysis and Management," editors C. Merle Johnson, William K Redmon, and Thomas C. Mawhinney, included an "Ethics and Business" section, explaining distrust toward business from antiquity. More recently in the 1950s and 60s:

"old horror stories about sweatshops and child labor were replaced by fear and anger toward the 'military-industrial complex.' In the 1980s, people (like anthropologist) Marvin Harris argued that (oligopolies increasing bureaucracy), and a shift to a service-and-information economy were the root causes of most of our social and personal problems." He omitted the financialization of America. Even then, Wall Street bankers dominated, running the country by controlling its money.

In the 1980s and 90s, numerous scandals erupted, including savings and loan fraud, insider trading, illicit deals with foreign governments, and public figures on the take. Although business and government officials claim ethics standards, scant evidence shows they practice them, the public finding out when corruption and other improprieties surface, reinforcing John Acton's maxim that:

Conducted in June, it showed:

-- deep dissatisfaction with the political system;

-- support for a constitutional amendment limiting corporate influence (specifically, funding parties and candidates to influence elections) "is broad and bipartisan;" and

-- 85% said corporations have too much political influence;

-- 93% believe ordinary people have too little or none;

-- Democrats and Republicans are part of the problem, not the solution, caring more about business than people;

-- when explained, 78% object, including the court equating spending with speech; it's not; it's bribery, influence buying, rigging the system to benefit them;

-- nearly two-thirds reject the notion that corporations are people; they're not; they're businesses; the largest are giant ones in oligopoly and monopoly industries with interlocking directorates;

-- half of respondents would pay more to buy from a corruption-free company;

-- political parties and the civil service are perceived as the most corrupt globally, the term corrupt public official, in fact, redundant;

-- in some countries, the judiciary was called most corrupt; also the police;

-- developing nations fared worst, but none are corruption-free;

-- governments do little to correct them when public officials are beneficiaries.

Overall, the results show "a public sobered by a financial crisis precipitated by weak regulations and a lack of corporate accountability." But people are also willing to actively support clean business. "What is needed now is bold action by companies (to correct) their policies and practices, and to report more transparently on finances and interactions with government."

Most important is public sentiment demanding responsible governance, not settling for ineffective, corrupted, collaborating ones, the common practice globally only grassroots activism can change.