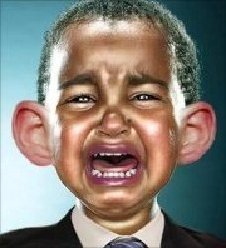 Wah! Wah! Wah!...just practicing for the November Elections.
Power of the Under-Vote*
(A Silent, but Deafening Roar)

Over the years, I’ve noticed that there always seems to be some ‘voice’ that tries to scare people into casting their votes one way or another.  Disturbingly, we only hear about the ones that are negatively driven.   We’ve seen the “wasted vote”, and the “defensive vote” touted through all the Olde Media outlets, but there is another option for you to consider; NOTA.

NOTA simply means ‘none of the above’.  It’s required to be placed on all Libertarian ballots, to keep the voting honest in reflecting the will of the body of voters.  Oddly enough, it’s actually illegal in some places to put this choice on the official state or government ballots.  Why do you suppose that is?

We’ve all said, of races, notably the last several presidential offerings, that none of the candidates on the ballot were worthy of holding that high office of trust. So, why isn’t NOTA a choice?  Why are we forced to, ugh, cast our vote for “the lesser of two evils”?  Could it be a simple political distraction to draw your attention from the ‘real’ battle? I vote, yes.

The ‘real’ battle is over how much control the government ‘We’ formed to protect our inherent rights as individuals, will exert on those same rights, and how much “We the People” will tolerate.

With the more identifiable slavery of his time, Frederick Douglas saw what ‘We’ are seeing today. Modern slavery is a bit more sophisticated, but far more callous, brutal and deadly than ever before.  Modern slavery is a kind of jail cell set up in our minds, where we lock ourselves in…but there are no locks.  Fortunately, it takes a lot of effort to be a slave, especially when we have to clean up our own cells and provide our own food.  It can be exhausting.

In our confused exhaustion, we might just find our salvation.  Mr. Douglas said it well, “The limits of tyranny, are defined by the endurance of the oppressed”, and many Americans have had enough.  They’ve reached the point, beyond which they will not be pushed. They’ve got no more blood to give “for the good of society”, the unnamed, undefined ‘poor’, or “the children”, the politicians keep yappin’ about.

Even folks dumbed-down by the government’s welfare school system have figured out that “defensive” voting is a fool’s game.  They’ve figured out that the guy who told them to vote ‘against’ the other candidate, because he throws kittens on cactus’, was really saying, “Vote ‘for’ me”, without ever having to tell them why they should.  And they’ve figured out that when they fall for this political chicanery, they artificially inflate the wrong guy’s pile, while under-inflating their own…and no politician in office pays any attention to the small pile.

Politicians no longer ‘represent’ their constituents—because the constituents haven’t represented themselves, accurately.  More and more people are waking up to the realization that the only ‘wasted’ vote, is the vote not cast in good conscience.

If you’re not choosing each candidate you cast a vote for, as if your ballot was going to settle those races—the way you want them to come out, then you are responsible for your own servitude, and lack of representation in your servant government.

Now I’m going to add my name to the list of people who ‘tell’ you how to vote: If you can’t vouch for any candidate in a particular race, don’t vote in that race. It’s that simple.

Most of the voting public has been indoctrinated by government welfare schools, and have been ‘trained’ to think that they ‘must’ check off a box for EVERY race.  In blindly doing just that, the voter ‘appears’ to actually have an opinion or a preference in every race—when they really don’t.

The ‘sports team’ mentality pushed on us by the Olde Media propaganda outlets works against the most fundamental desire of individual voters, to be ‘represented’.

The ‘sports team’ mentality is what ‘straight ticket’ voters make victims of themselves with.  Somehow, these people have been convinced that every politician who runs under the same party affiliation will actually represent ‘them’.  This ignores the fact that ‘bad’ people come into all political parties, and they do.

Voting for candidates just because they are in the same party isn’t a display of “party loyalty”—it displays a total dis-loyalty, to our families, our friends and this incredible nation.

In the alternative, withholding your vote in races where you can’t vouch for a candidate makes it clear that you will not waste your vote again, and doesn’t give any candidate the illusion of support they didn’t earn.

Imagine a race where all of the candidates combined got less than a few percentage points against the total number of ballots cast…think the politicians might try a little harder to get support by actually representing y-o-u?  Would it really be so bad if a few seats actually went unfilled every once-in-a-while?  That’s why the ‘under vote’ is the loudest voice you’re ever going to have in the political spectrum.
*Writers note: This column does not address the very real problems of the competing frauds on the voters of “illegal” (unqualified) voting, and “deliberate” miscounting of the ballots actually cast. That’s a whole ‘nother column.