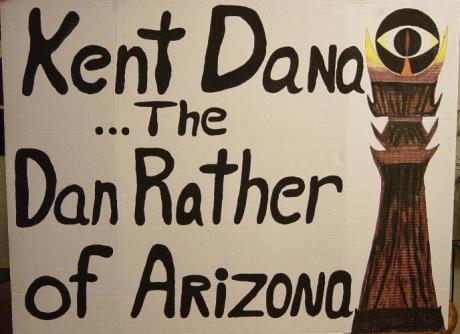 In 2002 Clearchannel talk show host for 550am KFYI in Phoenix, Az., Charles Goyette, was asked by the Chamber of Commerce to moderate a debate for the race for Arizona Governor. Initially the plan was to exclude the Libertarian candidate Barry Hess. Charles refused under those conditions and made it clear that he would now have 2 weeks to express his concerns to his audience,... Barry Hess was added to the debate.

Faced with the same decision 4 years later when asked/assigned to moderate the debate for Arizona US Senate race between Jon Kyl, Jim Pederson & Richard Mack (without Mack), I wonder if well known and well liked Kent Dana even had a second thought as to what he was being asked to be a part of. Charles Goyette would eventually loose his job with Clearchannel due to his refusal to support the invasion of Iraq and would have to start all over on smaller stations and help build another station with his talent and supportive audience.

Only a few dozen in the media and various campaign supporters at the TV station saw this sign made in a couple hours with supplies from the local 'Michael's' art supply store (that I now have ready for my next sign) So does this sign need to be produced in quantity on 4' x 8' corroplast or will we be able to buy billboards? I think it is more likely that I will have moved on to another more interesting target by the end of the week. But the management and owners of KPHO TV5 cBS affiliate had better take note. Truth has a way of slipping out between the fingers of collectivist propaganda. The Internet is just an outlet of what people are thinking. This photo example will hit the Internet and have a life of its own. What is said and not said about political activists and/or candidates that oppose the abuses of state power only has the weight of the credibility of those doing the reporting.

This little example of political activism is to inspire some and warn others. The message to all is that it is no longer possible to exclude the voice of reason and truth and peace from public discussion without facing some sort of blowback from a liberty starved people that will refuse to allow ignorance of the truth to prevail. It is also a peaceful example to demonstrate how to fight an injustice effectively without the need to resort to violence (these examples are more important with each passing election)

The reference to Dan Rather and the 'All Seeing Eye of cBS/Sauron' is simple. Credibility is everything in the news business, and to remind KPHO of that is a favor I am pleased to provide them. The popularity of this $11 sign will only equal the injustice felt by those that share the outrage felt by the exclusion of Fmr. Sheriff Richard Mack from a debate lacking a peace candidate that, unlike the democratic challenger, has actually been an elected official.

Sure I could have focused on KPHO or its management, but injustice usually has a face and Kent lent his to this effort to dupe the public and that is why he needed an itty bitty reminder,… because I always liked him.

Nonviolent film festival From the desk of Bruno Pischiutta

How Your Masks Are Made