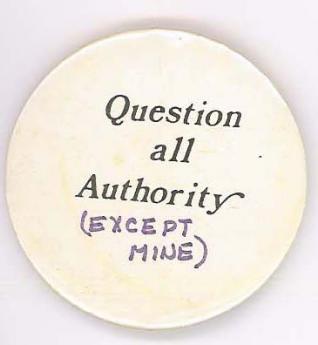 Howie Rich is now famous; the very, very long time lynch pin of the Crane Machine was featured last Friday on the news program NOW.
Those ancient libertarian folks who remember the very old days know that it was Howie Rich who, with Edward H. Crane, III, took the LP from a movement that spontaneously organized itself across the country to a top down organization that limited information flow to a "need to know" basis. Local activism was sharply discouraged. This was so pronounced that after the Clark Campaign most local activists swore they would never support any national candidate proposed by Crane and Company again despite the seductive clink of Koch dollars.
There was a goofy software developer who wrote the following ditty on Cato Institute, which was the base of wealth around which the Crane Machine operated.

The Cato Song
(by what's his name)

Ed Crane is Cato's president. He keeps his standards high
He says he runs a trim, taut ship, yes, just like Captain Blight
The similarity is really nothing but a joke
For they'll be no mutiny on the bounty of billionaire Charles Koch

C – A – T – O, C – A – T – O
Aren't you glad they're helping freedom grow?
They divide the labor equally, they lead and we follow for liberty
The finest freedom fighters that we know.

Murray Rothbard plans the long range Cato strategy
And here is Murray's sage advice for friends of liberty
We must be more professional, we must be better lead
We need centrally planned anarchy if we're to forge ahead.

C – A – T – O, C – A – T – O
Aren't you glad they're helping freedom grow?
Our most prolific scholars worth their weight in fiat dollars
The finest freedom fighters that we know.

Bill Evers edits Inquiry, the Cato magazine
His footnotes all have footnotes to tell you what they mean
His annotated bibliographies have footnotes, too
Read Inquiry or stay ignorant, the choice is up to you!

C – A – T – O, C – A – T – O
Aren't you glad they're helping freedom grow?
They're short and tall and furry, their Bill and Ed and Murray
The finest freedom fighters that we know.

That was written and performed around 1980 and reflected what most of us knew about Crane and Company, so while Ed and Howie and friends are older and saggier and Murray was given the bum's rush from Cato for having other ideas on economics in 1981 and Williamson Evers is now happily ensconced at Hoover Institute and attended the Bohemian Grove event with John Fund this year, many things have remained the same.

But Libertarians should think hard about this. The expose has just begun, rumor has it. Many Americans are angry with what they view as deceitful behavior and are identifying Howie and his friends as Libertarians. There are political ramifications and even more profound issues to consider here.

You will hear the issue posed by the media as one of legality. Most libertarians will reject that argument. If the State is illegitimate then it has no right to make laws that limit the actions of individuals, especially if their actions are arguably self-defense and intended to bring the State to its knees. But is this true? And will their actions result in more or less freedom for those impacted? On the illegality issue, Howie and friends might have acted illegally, if not in refusing to report the source of their donations but in other ways. Some are saying they violated statutes on money laundering, through that remains for a court to determine. How do Libertarians view such actions? Are they allowable as a means of self-defense?
On the argument of acting in their own defense did they have a right to mettle in the affairs of states where they do not live? Would these actions have been allowable it Howie had spent the money in New York? Since Libertarians tend to believe that self-defense does not include harm to innocent parties any actions that resulted in such harm to those in the states targeted would not be defensible. The facts indicate that they have acted covertly with intention to deceive. Those they deceived were those signing petitions who did not understand the proposed statutes.

They have undoubtedly caused to be created Astroturf organizations in around 24 states that have placed initiatives on the ballots in those states. They have worked to have it appear that those initiatives had local support when they did not in most cases. In each case where they worked to create an illusion of grass roots and encountered the argument of disclosure they repeated, like parrots, that they were following the law and had no obligation to disclose the origin of the funds used.

From that I deduce that the source is not Howie Rich, but someone with far deeper pockets, maybe even someone mentioned in the ditty above. But that is just me.
The core of the issue Libertarians need to consider is very different from those above, however. It is the same issue that caused Crane and Howie to run into opposition in the LP.

Are the actions of Howie and Friends forwarding or hindering the cause of libertarianism? I think they are harmful, here is why.

America's structure of government is now fascist. To mount an effective opposition we need to focus on enabling local people to organize effectively and as far as possible, we need to enable local people to keep their money. Through mandates and taxation, direct and through the regulatory abuse of the nasty combination of government and quasi-governmental corporations, Americans are being bled dry. Debt is rising, 40% of American mortgages are now held by Chinese, and many states are nearly bankrupt, causing them to put additional squeeze on those living there.

We may need to fight a war. Americans today lack organization and resources.
Any effective resistance necessitates an alternative infrastructure for maintaining life while that resistance can work.

As was true in 1775, with the Powder Revolt, we need to ensure we have what is needed to do what must be done now. None of us know exactly what will be necessary but without supplies any army starves. Independent local organizations, cooperation, communication, and trust are essential to any effective action.
Building out that alternative infrastructure in the communities across the United States should be at the top of the agenda. But that is exactly what Howie and Friends have opposed, both historically and with their present actions.

Their strategy is flawed. This may be simple stupidity but their actions lend themselves to another interpretation.

They appear to be living well, most of them within six blocks of a golf course, by running these Initiatives, many of which have pulled in money from libertarians in addition to being funded by the corporations who traditionally fund Cato. For them as individuals this has been lucrative. Crane pulls down a half a million as Cato president every year not counting his other sources of income, for instance serving on various boards.

Go look over the names of those corporations and then examine the source of their profits. Koch Industries itself was in Vietnam with Halliburton and is today in Iraq as a working Halliburton partner. Think cost plus contracts, both there and here in America.

Now, no Libertarian minds profits. But honest profits do not come through government contracts or by using government as a tool of their corporate policy. Therefore Libertarians need to ask themselves what message Crane, Howie and friends are sending to us and to Americans. If they really thought in 1980 that their fellow Libertarians were too dumb to run their local chapters of the LP and Americans are incapable of self government then perhaps they should find a country that better suits them. Or perhaps they could all move to New York and live with Howie.

I sent this button to Crane in 1980. Questioning all authority means everyone. It is not the State that now betraying freedom, that already happened. It is our friends we need to scrutinize.

Spiritual Politician, the show that exposes the nasty side of life with government and human greed, will host Hart Williams, the journalist-blogger whose work has exposed the covert attempts by such organizations as Americans for Limited Government to change law without the either the participation or the informed consent of those who are impacted. The show airs Friday, September 29, 2006 at 4 PM PDT

Hart Williams was annoyed over the ballot propositions that were turning his community upside down. He decided to find out who was behind the steady stream of initiatives that as far as he could see had no local support. He found out and now so can you.

Hart Williams grew up in Wyoming and graduated from Santa Fe High School in Santa Fe, New Mexico. He attended Texas Christian University and moved to Hollywood, California in 1976.

Mr. Williams has been a professional writer since 1976, published since 1973. He has written for newpapers and magazines from the Washington POST to the Los Angeles TIMES and FREE PRESS, The Kansas City STAR, Portland OREGONIAN, NEW WEST, OUI, Los Angeles Magazine, the Santa Fe SUN, and more. A published novelist and screenwriter, he lives in Eugene, Oregon with his wife -- a science fiction author in her own right -- her centenarian father and their Manx cat.

Host Melinda Pillsbury-Foster commented about the revelations on Rich and Crane, "Howie Rich has been carrying the water for Ed Crane for over a generation. Some things won't change until Howie is planted next to Ayn Rand in Valhalla."

BBSRadio.com is an online station whose shows may also be heard on the air in your area. The call in numbers for the station are: From the USA: 877-876-5227, From Canada: 888-810-8322, or call direct to: 530-876-3222. For information on how to have your favorite shows heard on the air locally contact BBSRadio.com. To receive a link to past shows for download to your ipod send an e-mail to: the.melinda@yahoo.com