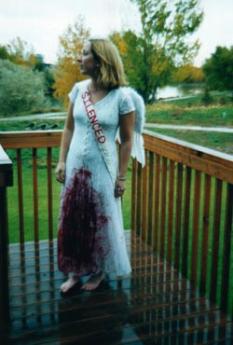 It's come to mind because my last book involved intensive research into the culture of the 1930s, the days when the John Dillingers, Machine Gun Kellys and Baby Face Nelsons wrecked havoc across the mid-west.

Time after time, whenever one of these killers was shot in a hold-up and needed medical attention, they sought out a creature who was considered one of the lowest dregs of society - an abortion doctor. These fallen healers, usually drug addicts, alcoholics, or greedy incompetents, did anything for a buck, including illegally treating and sheltering felons.

That, in most instances, was tolerated. Killing babies wasn't.

Kind of puts the abortion debate is a whole new perspective.

Truth is, despite widespread public acceptance, the medical profession appears to be no more proud of these practitioners today than back in the 1930s. I've never seen a business card that stated "Joe Blow, M.D. - Abortionist." Never heard a mother proudly say "My son the abortionist!" Never heard a lady crow that she was dating an "abortionist." Instead, we are fed a blinding fog of euphemisms – words used hide or disguise something's true meaning.

The phrase "Pro-Choice" itself is nothing more than a horribly misapplied euphemism.

From any perspective, that doesn't seem right.

Dig deeper into the pro-abortion movement and you'll be assaulted by more euphemisms. They speak in terms of zygotes and fetuses, which they say are not-human. The government has sanctioned such descriptions, helping ease everyone's conscious.

But wait a second. Isn't that precisely what Adolph Hitler did? Fetuses, Zygotes, Jews, Blacks, all stripped of their humanity by semantics, and then exterminated without guilt?

Pro-abortion types recoiled at these comparisons and indigently reach for the trusty euphemisms. Yet, if you pile up a hundred second term aborted babies and take a photograph that makes it impossible to determine perspective and size – as photographs do – will the resulting picture appear any different than the mountains of starved humans found at Auschwitz?

Legally, the issue is just as muddled. Scott Peterson was charged and convicted of double homicide for the murder of his wife and unborn baby. Laci Peterson could have killed that same child, against Scott's wishes, and suffered no legal consequences.

That makes sense? Why should men care one wit about contraception if they are given no choice in the matter?

Here's something else to ponder. What if one of America's growing list of enemies creates an ingenious weapon that can kill every "fetus" in every mother in America? Would that be acceptable? Would that justify retaliating against such an enemy? If you follow the pro-abortion logic, they haven't hurt anyone or done us any harm.

I'm also confused by the heated emotions in the abortion debate. Not on the side of the anti-abortion crowd. The knowledge that babies are having their heads crushed and bodies mangled by the tens of millions can indeed stir rage. The fact that their opponents blindly support a modern-day genocide – which is precisely what it is – can be infuriating.

It's the other side that boggles. What are the pro-abortion people so angry about? Not being able to crush infant skulls? A woman's "right" to control her body for nine months in return for taking ninety years of life from her own child?

Our government says it's all good, and we shouldn't think this way. Hard not too, especially when researching a book about a bygone era where despite all the machine gun fire, life was held to be so much more sacred than it is today.