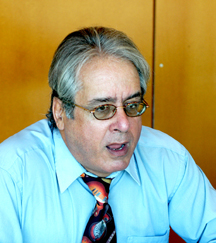 The status of the American elections system is not music to the ears of Dan Gutenkauf, a professional musician, political activist and member of Citizens for a Fair Vote Count.

Inspired a decade ago by “Vote Scam,” a book by Jim Collier and an article entitled “Pandora’s Black Box” in the November 1996 Relevance newsletter, he and his twin brother, Dennis went to observe a vote count, as permitted by law, in Tempe and were initially threatened with arrest when they insisted on monitoring the count. They left peacefully and took the issue all the way to the U.S. Supreme Court.

The high court refused to hear the case, but Maricopa County changed its elections procedures manual to permitting citizens to witness vote tallies. Mr. Gutenkauf says judges do not want changes in election law and he called a judge who heard his case at a lower court “corrupt.”

Mr. Gutenhauf and Sen. Karen Johnson, R-18, teamed up to draft and push through S1557 this year, which requires a hand-count vote audit in selected precincts and contested races to measure the accuracy of electronic voting machines.

The Gutenhauf brothers were recently voted into the Iowa Rock and Roll Hall of Fame. Dan Gutenkauf was interviewed on primary election day, Sept. 12, at Arizona Capitol Times.

Did you vote today?

I’m getting ready to vote after I leave here. Usually, I wait until the end of the day because I like to go in and see how many people have voted in that precinct because the number shows on the optical scanners… it’s a check and balance against what was recorded down at the central counting center.

When you vote, Dan, are you worried that your vote, or the person behind you or the person in front of you, is going to be counted accurately?

I have concerns, yes, as to whether it’s accurately counted or not, based on everything I’ve read. And a lot of it has to do with things that have already been testified to in court…

Distrust of the machines. I think the elections workers there are honest people. They are there to do their civic duty and help out, and most of them don’t have a clue how the machinery works or functions. The problem is as this article points out in Relevance so eloquently is that it is a trade secret with the software — no one is allowed to examine them. There can be hidden subroutines in that software that have trapdoors, which allow someone to come in after the fact and alter the results.

They can have flip-flop devices and so forth that, at a certain time of day, it can be programmed to automatically siphon every third row from candidate A over to candidate B, or at the very end when they hit that button for the totals, it can manipulate the vote count It’s totally undetectable to the election workers… it’s also possible to have those programs erase themselves after they’ve gone into implantation. So there’s no way to detect computer fraud.

Unfortunately people such as Secretary of State Jan Brewer think, well, just because there’s no hookup or connection with these computers with an outside line or Internet, that precludes anybody hacking into the machines. Jim Collier knew this was possible back in 1992 with a laptop computer and with the right access code, you could hack into that computer and alter the results.

They have what’s called a “red test”… they can do these tests to see if the computer can be hacked into. That’s one of the things I proposed in this initial bill (S1557), and they rejected when Sen. [John] Huppenthal gutted the initial bill.

Let’s say you take a close race… and somebody comes to you or some expert you know and says, “Look, here’s one million bucks. I want Goldwater to win. You’re saying it’s very possible.

Sure. There have been numerous instances of people who worked for these private vendors — people who have been convicted of bribery — so certainly it’s not out of the realm of possibility.

Will you make another attempt next legislative session to get the provision in there that the machines be pre-tested against possibly being able to be manipulated?

Aren’t those tests conducted only by elections officials, and there’s not outside —

That’s correct. They’ve not done any red tests… to determine the vulnerability of the computers to hackers from the outside. There also needs to be an examination of the software code. If it’s secure enough, it will be impervious to hackers and so forth. But we need to know what’s going on in that source code. Otherwise it amounts to a secret count.

Should there be an acceptable margin of error?

There will be naturally occurring error and an acceptable margin. That’s the purpose of the Vote Count Verification Committee (created by S1557), which I proposed. I think one of the things that got this legislation through was the fact that there was some leeway, some flexibility for determining this margin of error.

Could that lead to a whole recount

Is there any recent proof of voter fraud in Arizona?

Voter fraud is hard to prove. This has been sort of the false argument that has been put forward: Election people and people who don’t believe vote fraud exists, they put the burden on the activists and say, “Show me the fraud, prove the fraud.”

[Later in the interview] I want to believe that my government is doing the right thing. I’m not one of these people who’s anti-government. If I was anti-government, I wouldn’t spend all the time I have studying the law, being politically active and trying to change elections and so forth.

Besides voting machine issues, software and so forth, what else with American elections needs to be fixed?

Many, many things. One of the big things, in my opinion, is early balloting… because you can register online now. There doesn’t have to be any face-to-face contact with any person in the election department or showing any ID. We did a tour of the early ballot process, and they take the early ballots that come in with the signature. They run an electronic wand across the envelope that scans the signature on the ballot and then it pulls up on a computer the signature that’s on file with the secretary of state or the county recorder, I should say, and those two signatures match.

The people who do that process are not handwriting experts, number one, and they’ve got limited time to do that. We calculated that there would not be enough time to do that whole process for the hundreds of thousands of early ballots that come in. My suggestion would be, and this would be very controversial and a lot of people wouldn’t like this, but it would be to go back to the original absentee balloting, which was for military overseas, for out-of-state that count vote or for people that know they’re gong to be away out of state on Election Day or for people who have a medical excuse and can’t physically get to the polls.

They changed it to early balloting under the guise of getting wider participation, but the problem is you may get more ballots coming in, but what is the integrity of those ballots that are coming? That’s the question. Greater turnout is not necessarily the objective at the sacrifice of legitimate voters.