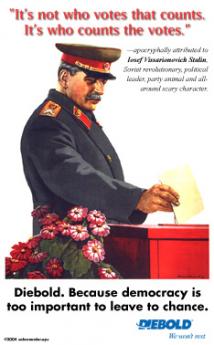 STRAIGHT FROM THE SHOULDER

Numerous breaches of the security of voting machines that could call into question the veracity of the vote happened in Tuesday’s Arizona primary election. That’s the bad news. Volunteering as a poll observer I visited nine different polling places in and around my assigned precinct in West Phoenix throughout the entire day. After some polite push-back trying to define what I could and could not do as an observer from a roving “Troubleshooter,” I pretty much had free access to the polling sites and the workers themselves. My former career as an auditor allowed me to conduct friendly interviews that yielded astonishing revelations about the security, or rather, lack of security provided for the election machines prior to primary day.

NOTE: Throughout the following report I am in no way implying that any of the poll workers I interviewed are in any way dishonest or engaged in manipulating elections. In fact, we all owe a supreme debt of thanks to these dedicated people who showed up to help shepard our democracy. Some were pressed into service, without training, because others didn’t bother to show up. Among the security issues I raise, my single most significant observation from this day was that we need more people like these; steadfast citizens who are willing to invest their time and energy into maintaining the cornerstone of our democracy. I will discuss this further in my next report.

Arizona is using touchscreen electronic voting machines, imposed on the counties by the Secretary of State Jan Brewer, for the first time in compliance with the 2002 Help America Vote Act (HAVA). The AZ SoS interpreted the act as mandating the use of electronic voting machines which it does not (Section 301(a)(3)). HAVA only mandates that provisions be made for disabled voters to vote in privacy without specifying a method or procedure.

The security flaws I uncovered were also found in the management of the opti-scan machines that everyone used to feed their ballots through which records a ballot cast for later counting of the votes.

Lack of security to protect access to the memory cards of electronic voting machines has been an area of grave concern since the machines became available. Mountains of evidence, on-line demonstrations, sworn testimony by computer experts and academicians, and reports from the GAO and the Brennan Center for Justice, citizen advocates and grandmothers have uncovered that a single individual, with access to the memory card, can manipulate the software to “steal” an election. This can be accomplished in minutes and leave no trace behind. Severe doubts have been cast over the Busby/Bilbray CD 50 special election in San Diego to replace disgraced congressman Randy “Duke” Cunningham (R). In that election the Director of Elections for San Diego County allowed their Diebold touchscreen machines to be taken by poll workers, up to two weeks prior to the election, to store in their homes, garage, and car, whatever until Election Day. This violated the specific law in California that mandated an air-tight chain of custody record and absolute security of the machines be maintained at all times. Dubbed “sleepovers” the practice has contributed to a complete distrust in the election outcome and numerous lawsuits. What happened in California is similar to what I discovered happened in Arizona yesterday.

The poll worker teams met the day before the election to zero the machines and run test ballots. This required breaking a tamper-evident numbered seal to gain access to the “on” button. This also gave access to the memory card. Securing the machines with another seal before locking up for the night was inconsistent between polling places. In some, the machines were left unattended and unsealed overnight. One poll Inspector volunteered to me that they took the memory card home with them overnight, replacing the memory card back in the Sequoia touchscreen machine in the morning. A tamper-evident seal was never reapplied and the machine remained unsealed throughout the day. With access to the memory card, it only takes a minute to alter an entire election. During the primary day I found some machines with tamper-evident seals in place and some that were not. In discussions with the poll workers the consensus decision was that training on the Sequoia touchscreen machines was totally inadequate amounting to “30 seconds.” No information was included for the Sequoia touchscreen machines was included on the DVD that was sent by Maricopa County Elections Department for on-site training by poll workers. Some polls had no one confident to run the Sequoia touchscreen machines and required a roving Troubleshooter to zero and run the test ballot on the machine. In other poll sites, they worked through the procedures by following the manual if they felt comfortable with computers.

Now for the good news . . . if you accept my own twisted sort of logic. At the end of the day I observed and confirmed with the poll workers that not one vote was cast on the Sequoia touchscreen machines! Nada, zero, zip, none. If this observation holds true throughout the state from just the nine polling sites I observed, or if only a handful of disabled voters statewide used touchscreen machines, millions of taxpayer dollars have been spent on electronic voting machines to accommodate a thankfully minority number of disabled voters. In a misinterpretation, or willful misapplication, of the HAVA law the Arizona Secretary of State Jan Brewer (R) co-chair of the 2004 Bush/Cheney campaign, has potentially misspent our dollars. With less expensive, more secure, and more acceptable voting mechanisms as judged by the disabled community that are compliant with HAVA available, SoS Brewer has done the people of Arizona a terrible disservice.

Honest and accurate elections are vital to our democracy. A dose of fiscal responsibility wouldn’t hurt, either.