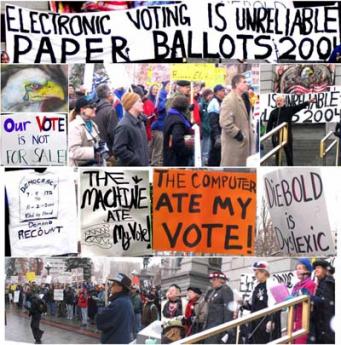 On August 23rd 2006 I presented a request for public information to the Secretary of State wanting to know where the Policy and Procedure Manuals for the Counties on the Manual Vote Count were. Maricopa County Elections Director will not allow the County Party Chairman (at least not the Libertarian Party Chairman Warren Severin) to submit names to the hand count committees until recieving this manual. Today is Saturday the 2nd of September and I just received a copy of the Policy Manual for the Recount. I suspect that the County Elections Department will not be taking any action until after the Labor Day Holiday. That means that this Tuesday will begin a process that will allow 3 - 4 full work days to accumulate, organize and train the workers that must now be provided by the County Chairmen of the 3 Ballot Status Parties.

You do see what is going on right in front of you, Right? And without the Internet and some help from The Arizona Capitol Times you would never even know how it is that we find very bad people in public office that are then able to steal, enslave and kill in our name. It was very important to me that you get a glimpse of the process that I have been up close and personal with for 16 years. Still Voting?

The East Valley Tribune reported that the Manual Hand Count is unlikely according to Jan Brewer.

More Stories on this issue here....... and here

By By Phil Riske

Officials were scrambling this week to complete changes to the state’s elections manual in an effort to have them blessed by the U.S. Department of Justice in time for the Sept. 12 primary election.

The Justice Department, which must clear any changes in Arizona election laws and procedures because of voting rights violations dating back to the 1960s, approved the new hand-count law on Aug. 11, 39 days after the Attorney General’s Office sent it to Washington, D.C.

Deputy Secretary of State Kevin Tyne said on the morning of Aug. 30 the office hoped to have the updated manual to the governor and attorney general by that afternoon or Aug. 31, after comments by county recorders.

The Secretary of State’s Office will request an expedited review by the Justice Department, he said.

Meanwhile, the Voter Verification Committee, which is charged under the new law with establishing margins of error in hand counts, has met twice, and the Democrat and Republican parties were in the process of selecting volunteers to perform the manual audits. County and state elections officials have said the hand-counts could take up to two weeks to complete.

Distrustful of voting machine accuracy and claiming certain machines can be rigged, proponents of hand-counts have tried for 10 years to establish the audits in Arizona. Others have accused Secretary of State Jan Brewer of attempting to delay implementation of the new law, which she denies. Mrs. Brewer says she has complete confidence in the state’s voting machines and election process.

“These are not just Brewer detractors, these are bipartisan people — some of them in her own party — who have been bothered that Brewer has gotten in the way of this,” said Israel Torres, the Democrat candidate for Secretary of State. He says he will make election reform a campaign issue.

“Brewer has been so tight-lipped,” Mr. Torres said. “We recommended to them to file both of the procedures and the law for pre-clearance at the same time. She knew that breaking the bill up in pieces would slow it down for pre-clearance.”

He said there have been enough voting machine failures that “It has created significant doubt.”

Mr. Torres said Mrs. Brewer has the connections with the Bush administration that she could easily obtain clearance from the Justice Department. “If she wanted this bill to get through, this bill would be done,” he said.

In a Zogby poll earlier this month commissioned by an election rights attorney, sizeable majorities of the more than 1,000 respondents said they were aware of flaws in electronic voting, that citizens have the right to know and view how election officials count votes and they wanted disclosure of the names of voting machine software vendors.

Reaction to an Arizona Capitol Times story last week about the possibility that S1557 won’t be implemented in time for the primary has come from as far away as North Carolina. “Arizona’s secretary of state needs to step up to the plate,” says an e-mail from Joyce McCloy, founder of the North Carolina Coalition for Verified Voting.

That state does what she calls “hand-to-eye” audits in all of its 100 counties.

C.D. Tavares, a local Libertarian precinct committeeman, calls Mrs. Brewer’s statement “hogwash” that her office had to wait for Justice’s pre-clearance on the bill before naming the Voter Verification Committee.

“Waiting for federal approval before appointing your committee is as nonsensical as waiting to have your diploma safely in hand before applying for colleges,” Mr. Tavares wrote.

Libertarian candidate for governor Barry Hess said, “In a conversation last Sunday at a church service, Jan made known to me her lack of enthusiasm for Mr. Hancock’s campaign message and her discomfort with his raising the specter of the public questioning the integrity of her elections. I thought to myself, doesn’t she know why Arizona has to ask the feds permission to implement state election law in the first place?”

At a recent Phoenix City Council district meeting where she spoke, Mrs. Brewer received police protection on her way out after being confronted by a detractor, Mr. Tyne said.

In an interview with Arizona Capitol Times last week, Mrs. Brewer said, “I can’t predict what Justice will do.” She said the new law is regressive.

“The reasons we went to technology is because of [the Bush-Gore vote],” Mrs. Brewer said. “So instead of going forward, we’re going backward [with manual audits]. I fully stand behind our optical scan equipment. It all comes down to faith and trust in your election officers.”

I am greatly disturbed by the "Guardian of Elections" and how she is subverting both the law and the will of the people. With Brewer's well-known ties to the Oily Bush administration, and if we begin to see some 51-49% Ohio-type election results, we will know Jan's true agenda and the method in which it is being acheived.