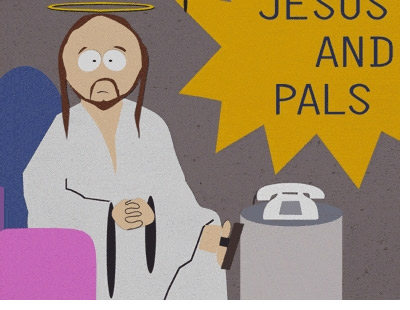 As expected, South Park creators Trey Parker and Matt Stone jumped into the deadly “can’t show the Prophet Mohammad’s face” controversy recently with a much ballyhooed two-part episode that threatened to display the Muslim icon in all his facial glory.

That the prophet’s appearance was totally inconsequential to the “Cartoon Wars I and II” episodes’ actual plot added to the sheer arrogance of the stunt. Parker and Stone were going to expose America to Muslim hatred, violence, riots, and bloodshed just for the sheer thrill of it.

“Cartoon Wars” was actually about the hilariously hateful and conniving Eric Cartman character being angry over comparisons to the rival Family Guy animated series. Reason seemingly prevailed when the offending scene of Mohammad coming to the Family Guy’s door to deliver one of those gag beer helmets had the prophet’s face blacked out in deference to Muslim custom. A written disclaimer then flashed on screen that stated Comedy Central, the cable network that airs South Park’s first run episodes, bowed to pressure and decided not to show Mohammad’s mug.

In a scathingly bitter irony, the story ended with extremely humiliating depictions of Jesus and President Bush defecating up a storm. The biting message being that the Christian savior and American president can be savaged at will in multiculturalized America, but it’s hands off when it comes to that Mohammad guy.

Biting indeed. And extremely disturbing. Somnambulant Christians might want to think about doing a little rioting themselves on behalf of their messiah’s sullied honor.

That aside, the story, however, didn’t end there. Parker, Stone and possibly Comedy Central had another typically devious card up their sleeves. A short time later, when the media attention subsided, South Park aired an old episode from July 2001 skewering magician David Blaine. The gist was that Blaine declared himself a god because he could perform better tricks than the old time deities. Jesus, a regular guest star on South Park who hosts a television talk show, united the earth’s major religious figures in a parody of the Batman/Superman/Wonder Woman “Super Friends” comics and battled Blaine for godly supremacy.

Lo and behold, there among Buddha, Joseph Smith, Moses, Krishna, Jesus and the rest of the earth’s old school gods and prophets was none other than the troublesome Mohammad. Not only was the fire-throwing Arab icon repeatedly portrayed, but the decidedly unflattering caricature hit his marks and spoke his various “get Blaine” lines without hindrance or hesitation.

The episode received nary a mention in the press, and incensed fundamentalist Muslims failed to behead anyone in retribution anywhere on the planet. Nor did riots ensue when eagle-eyed viewers noted that even in the “Cartoon Wars” episodes that respectfully blotted out Mohammad’s face, the sneaky creators had already slipped it into the MTV-like quick cut montage that serves as the opening credits.

As Cartman would say, “Sweeeeeeeeet.”

The moral to this little cardboard tale is as muddied as it’s multifaceted. The first bares repeating. Violent religious radicals in repressed nations have successfully managed to elevate the hushed respect for their prophet far above the once sacred Christian messiah. And their long reach has extended to a powerful, Christian-dominated democratic nation strangled by a bizarre and confusing form of political correctness. Satirists in America can savage Jesus and the President in unspeakable ways, but can’t so much as show the face of a foreign prophet revered by some of our most fervent enemies.

That is, of course, unless nobody in the media is paying attention. Then they can ridicule the foreign prophet as well. And repeat it in syndication without repercussion.

Stan and Kyle, South Park’s eight-year-old voices of reason, didn’t even pretend to postulate anything significant from the ordeal, although Stan gave it a shot with a lack luster spiel about religious unity – itself a form of superior religious thought.

Hopefully, the rest of us learned something far greater about caving in to the loudest, most violent bullies on the block – the porcine Cartman notwithstanding.

Nonviolent film festival From the desk of Bruno Pischiutta

CNN Gets a Taste of Their Own Medicine